The world’s unprecedented refugee crisis has morphed into something more intractable and potentially more deadly as a record number of people face famine and starvation across the world in 2018.

The rise in protracted, man-made emergencies means more than 130 million people are at risk of starving, according to the UN’s Global Humanitarian Overview for 2018.

The global humanitarian system faces its toughest year ever with 135.7 people in need of food and protection.

It says $US22.5 billion billion in aid will be required in the coming year to help even just 90.9 million of the most vulnerable people.

And a serious funding gap looms that could leave more than 40 million people at grave risk.

In early 2017, the World Food Program (WFP) identified four countries – Nigeria, Yemen, South Sudan and Somalia – as being at risk of severe famine threatening more than 20 million people, impoverished and displaced by their respective wars.

Just four years earlier, drought-induced famine in Somalia claimed the lives of some 260,000 people – half of them children under five.

Some of the worst funded emergencies in 2017 were in Sudan, Chad, and Burkina Faso. An upsurge in violence in the Democratic Republic of Congo has also caught aid agencies by surprise.

The UN’s Overview report predicts that in 2018, conflict will remain the main driver of humanitarian needs, while natural 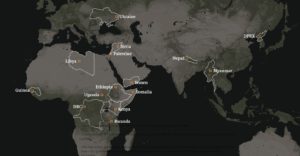 disasters will also cause many people to need emergency aid.

“Overall, more than 135 million people across the world will need humanitarian assistance and protection – and more funding than ever before is required to help them,” the Overview says.

“Humanitarian agencies are committed to becoming more effective, efficient and cost-effective in order to respond faster to crises and in ways more attuned to the needs of those they are trying to help.

“In 2018 we will undertake more comprehensive, cross-sectoral and impartial needs assessments and we will contribute to long-term solutions by partnering more closely with development agencies,” it says.

Frontline aid agencies like WFP are not yet out of resources and donor support for all their programming needs but the pressure to find funding for new or resurgent emergencies means some projects can get starved.

A case in point is the refugee camp at Dadaab, in Kenya’s northeast which has been open for over 25 years, and has suffered repeated ration cuts.

In Rwanda, WFP has been forced to make the first ration cuts since 2012, and may have to make bigger savings in 2018 if funding is not found now for its operations covering 130,000 Burundian and Congolese refugees.

WFP says school feeding schemes are currently at risk in Myanmar, Burkina Faso, and Guinea, where school meals work as an incentive for parents to send their children to school, while relieving hunger and malnutrition at home.

The agency says it almost never has all the money it needs, and faces an ongoing challenge of continuously prioritising those most in need.

These means that inevitably there are always groups of vulnerable people at the back of the queue.

To find out more or make a contribution: http://interactive.unocha.org/publication/globalhumanitarianoverview/