The latest annual report on global human rights has called on the incoming Biden administration in the US to restore support for human rights and embed it as an element of US domestic and foreign policy.

In his introduction to the 31st annual review of global human rights by NGO Human Rights Watch, Executive Director Kenneth Roth says the Trump administration had mostly abandoned human rights protections along with nations such as China and Russia.

“After four years of a president who was indifferent and often hostile to human rights, the November 2020 election of Joe Biden to the presidency of the United States provides an opportunity for a fundamental change of course,” Mr Roth said.

“Donald Trump was a disaster for human rights. At home, he flouted legal obligations that allow people fearing for their lives to seek refuge, ripped migrant children from their parents, empowered white supremacists, acted to undermine the democratic process, and fomented hatred against racial and religious minorities,” he said.

“He also closed his eyes to systemic racism in policing, removed legal protections for lesbian, gay, bisexual, and transgender (LGBT) people, revoked environmental protections for clean air and water, and sought to undermine the right to health, especially for sexual and reproductive health and older people. 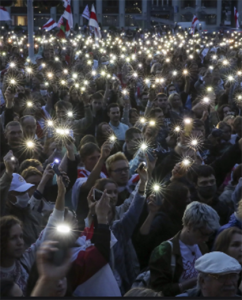 “Abroad, he cozied up to one friendly autocrat after another at the expense of their abused populations, promoted the sale of weapons to governments implicated in war crimes, and attacked or withdrew from key international initiatives to defend human rights, promote international justice, advance public health, and forestall climate change.

“This destructive combination eroded the credibility of the US government even when it did speak out against abuses. Condemnations of Venezuela, Cuba, or Iran rang hollow when parallel praise was bestowed on Russia, Egypt, Saudi Arabia, or Israel. Support for religious freedom abroad was undermined by Islamophobic policy at home,” Mr Roth said.

The report says that nations such as China, Russia, and Egypt sought to undermine the global human rights system.

But it said a series of broad coalitions came to the defence of human right, including a range of Western countries and also a group of Latin American democracies and a growing number of Muslim majority states.

The report says the Biden government should seek to join these collective efforts.

“US leadership can still be significant, but it should not substitute for or compromise the initiative shown by many others. The past four years have demonstrated that Washington is an important but not indispensable member of this broader team defending rights,” the report said.

The report looked at human rights in more than 100 countries.

It cited the “cycle of repression, corruption, and economic devastation under Nicolás Maduro in Venezuela” but pointed out that 11 Latin American democracies plus Canada came together in 2017 as the Lima Group to ramp up pressure on Maduro.

It also referenced the violence in Syria’s north western Idlib province, where three million civilians, half of them displaced from elsewhere in Syria, had been living under repeated aerial bombardment by Russian and Syrian aircraft.

“Often these attacks targeted hospitals, schools, markets, and residential areas. The German, French, and Turkish governments (the latter despite worsening repression at home under President Recep Tayyip Erdogan) put sufficient pressure on Russian President Vladimir Putin to secure a ceasefire ending these attacks beginning in March 2020 and largely continuing throughout the year,” the report said.

It said European governments had taken a lead on important initiatives as the increasingly authoritarian governments in Hungary and Poland undermined the checks and balances on executive power that are essential to democracy.

The European Union used conditioned its generous subsidies to these governments on their respect for the rule of law, although an end-of-year compromise ended up making this tool less powerful than many had hoped.

The report also focused on Belarusian President Aliaksandr Lukashenka who highly controversial claim that he had won the August 2020 elections as forces under his command proceeded to detain and torture protesters.

The EU imposed targeted sanctions on 88 individuals whom it deemed responsible for the repression, including Lukashenka.

Finland led a similar initiative for war crimes in Libya, as Iceland initially did for the thousands of summary executions of drug suspects instigated by Philippines President Rodrigo Duterte.

Australia, Austria, Belgium, France, Germany, and the Netherlands took the lead in securing an investigation of repression in Eritrea.

The report said that in Russia, protesters objected to constitutional reforms that weakened human rights and allowed President Putin to extend his term in office; protracted protests also erupted in Russia’s far east in response to the Kremlin’s removal of a popular governor.

“In Hong Kong, the trigger for protests was Beijing’s threat to permit extradition to mainland China without legislative or public oversight – protests that proved intolerable to President Xi Jinping because they demonstrated that when people on Chinese territory are free to express themselves, they reject the dictatorship of the Chinese Communist Party,” the report said.

It said the most powerful target of an increasingly global defence of human rights was China.

“Repression in China has deepened severely in recent years under Xi Jinping, with the detention of more than one million Uyghur and other Turkic Muslims in Xinjiang to pressure them to abandon Islam and their culture, the crushing of Hong Kong’s freedoms, ongoing repression in Tibet and Inner Mongolia, and the crackdown on independent voices throughout the country,” the report said.

“This has been the darkest period for human rights in China since the 1989 massacre that ended the Tiananmen Square democracy movement. Yet governments have long been reluctant to criticize Beijing for fear of retaliation,” it said.

The report cited Australia and the economic reprisals it suffered in 2020 when the Chinese government imposed punitive tariffs on various Australian goods, because Canberra supported an independent investigation into the origins of the Covid-19 pandemic.

The report said the Chinese government in October sought a seat on the UN Human Rights Council.

The report said that pressure on China over its human rights record forced it for the first time to give a number for the Uyghur and other Turkic Muslims directly affected by its conduct in Xinjiang – 1.3 million.

China claimed they were in not detention but in “vocational training centres.”

It also claimed that many had “graduated,” although this may well mean they have been co-opted into forced labour.

The report also noted Israel’s oppressive and discriminatory treatment of Palestinians in Occupied Palestinian Territory (OPT). It recommended that Biden should resume US funding for the UN Relief and Works Agency for Palestine Refugees in the Near East and the UN Population Fund.

It also pointed to Indian Prime Minister Narendra Modi’s encouragement of discrimination and violence against Muslims.

Mr Roth said it will not be enough for Biden to respond to Trump by simply turning the clock back four years, as if an abandonment of Trump’s policies can reverse the devastation he caused.

“The world has changed, and so must the promotion of human rights. Many rights-respecting nations have responded to the void created by Trump’s indifference and hostility to human rights by stepping forward and playing a more active leadership role,” he said.

“Biden should seek to reframe the US public’s appreciation of human rights so the US commitment becomes entrenched in a way that is not so easily reversed by his successors. The sustained role of the US government as a useful partner in defending human rights worldwide depends on Biden’s success,” Mr Roth said.

Australia received both praise and censure in the report.

“Australia is a vibrant multicultural democracy with robust institutions. Yet, 2019 saw freedom of expression come under unprecedented pressure, with police raids on journalists and a government official, and the prosecution of a whistle blower and his lawyer for violating secrecy laws. Overly broad national security laws are open to misuse,” the report said.