As a doctor working in Iraq during the conflict there, Asseel Yako saved hundreds of lives.

His daily work was tending to battlefield wounds suffered by soldiers or militia members fighting ISIS or patching up women children horrifically injured in explosions of gunfire.

He has studied and worked as a doctor for almost twenty year and yet in here Australia he is struggling to be able to resume his career.

For Asseel in his home town of Qaraqosh even travelling to work at the city’s hospital was perilous.

“It was dangerous simply getting to work. There were bombs, kidnappings and people were killed on the street,” Asseel said.

“A friend of ours – a surgeon – just disappeared one day,” he said.

Asseel loved his work as a doctor in Qaraqosh – a largely Assyrian city in northern Iraq – and now living in Australia as a refugee he wants to work and contribute to give back to the country that afforded his family sanctuary.

“Inside the town things were dangerous but OK for a while. We had different people coming from other parts of Iraq to the hospital in the town,” Asseel said.

“When the security forces were present, everything was fine but when they left after ISIS came it became ever dangerous,” he said. 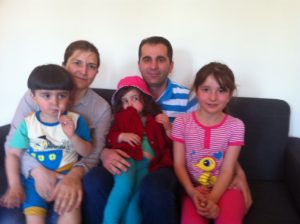 Asseel took his family away from Qaraqosh and eventually to Jordon in August 2014.

“My wife was pregnant and about to go into labour. We moved to Erbil – a ten hour road trip – and after a week my wife gave birth to our son Darwin,” he said.

The family stayed in Erbil until February 2015 when they moved to Jordan.

“We rented an apartment there and I worked as a volunteer in a refugee camp for Syrians and Iraqis because I was not allowed to work,” Asseel said.

“We lived in a poor area in the town but even there rents were very high and life was difficult,” he said.

“After one year our visa application was accepted and we moved here to Australia.

“We arrived in February and lived at first in Werribee then we moved here to St Albans to be closer to some relatives who are helping us,” he said.

As members of a Christian minority in Iraq they were subject to repression.

“But things were quiet until 2014 when ISIS invaded Iraq – they are an aggressive and bloody militia,” Asseel said.

“We could not stay in our town because we knew they would kill us. We saw what happened to the Yazidis… they took the women, killed the men and enslaved the boys,” he said.

“In our town 100,000 people fled their homes. Family still living in Lebanon.

Asseel studied medicine for five years and worked as a doctor for more than a decade.

“When we arrived in Australia we received a lot of help regarding our general life but not much support in terms of resuming my medical career.

“I still need a lot of help in finding my pathway. It looks like it will take about five years and a lot of money to get qualified and to pass the steps that prevent me from working as a doctor,” Asseel said.

The Occupational English Test he needs to pass requires a very high standard of English. Five small errors, include using the wrong tense when writing a verb, can mean failure.

Asseel also faces an interview with the Australia College of Physicians and if approved must then find a job and complete a four year medical course.

If he cannot find a hospital that will take him on, his approval will lapse and he must start all over again.

The interview will cost him $6,000 which is not refundable if he does not pass.

Added to this is the $10,000 fee the Australian Medical Council Charges to verify his qualifications and documents before he can even start the process.

Asseel says his family lived for two years as internally displaced persons (IDPs) in Iraq and received no support from anyone, including the Iraqi government.

“Since arrived in Australia, we have received a lot of help,” he said.

“When we arrived my daughter Roxanne had pneumonia and was in hospital seriously ill for a week. In the aeroplane coming here there was someone who was obviously sick, he was coughing all the time.

“I think that is how Roxanne got sick,” Asseel said.

“There are a lot of people from Qaraqosh here. Most are working or studying English. All of them are fine,” he said.

Asseel said he was working hard to rebuild his life in Australia.

“I lost everything: my job, my house and the good life I was leading. I had just finished years of studying and now I have to start all over again,” he said.

But Asseel is grateful that his family is safe.

“I want to thank the Australian Government for what it has done for us. At the time when we were in desperate need, no one else – except maybe Canada – was accepting us,” he said.