For more than 25 years Johnny Abo worked as a journalist for the local and international media trying to explain the workings of Syria’s government and society to the outside world.

But as conflict and corruption engulfed his homeland, his work and life became more and more precarious.

Eventually, he was directly targeted by the Syrian government because of his stance on free speech and objective reporting and he was forced to flee.

He now runs the Annas News website from Melbourne which connects Australia with the Arab world through news about politics, economics, lifestyle and sport. 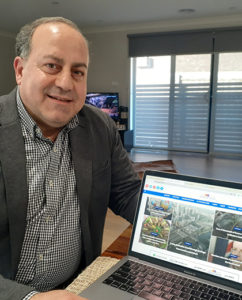 “I feel like the site is a bridge between the two cultures. We try to explain what is happening in Australia to the Arab world and help Australians understand more about the Middle East,” Johnny said.

“I think this is important because trade tween the two zones is now worth something like $20 billion a year,” he said.

“We are also trying to attract an audience among the newly arrived Arab community in Australia by explaining the wonderful opportunities that exist here,” Johnny said.

Forced to leave their home in Damascus in 2012, Johnny and his family relocated to France where he worked as a journalist.

They spent time living in New York before finally settling in Australia in 2016.

Johnny worked for Arabic radio and the Arabic language newspaper El Telegraph before starting his own business.

He is now Editor in Chief of Annasnews, a news website that reports on issues common interest to people in Australia and the Middle East.

Johnny says journalism has always been his calling.

“For me journalism is not just my career; it’s my passion and my hobby too,” he said.

“I started working in journalism early – before and while I was studying at university.

“I worked for international media agencies such as Deutsche Press Agency, France 24 and Radio Monte Carlo as a well as newspapers in the Middle East.

“Before the revolution, the Syrian government allowed private media outlets and I was one of the few who wanted to work for a fully independent newspaper.

“I like to think we raised the bar and we were proud to be working for freedom of speech,” Johnny said.

But, as the bitter civil war took hold in Syrian press freedom became an early casualty.

“Everything we tried to do the government shut down. After the conflict began each time we were stopped got up and tried again despite the pressure from the government,” Johnny said.

“The government is biased against its own people and what it does often doesn’t benefit the people. This is how we ended up with a revolution in Syria.

“And as an international correspondent in Syria, it became more and more difficult to work because of the security issues and blockages and lack of access imposed by the government,” he said.

Johnny says the freedoms Australians enjoy make the country attractive people all over the world.

“Australia is like a dream to many people outside the country. Part of what we are doing is trying to make Australians understand that,” he said.

“I worked for 15 years with European organisations and I have had strong connections with the US, but we are very happy and proud to be here now.

“While I will always love Syria and Syrian culture, Australia is now my home. I will always come back here because this country has provided avenues for opportunity and success for me and my family.

“We are very grateful to be in this beautiful and progressive country. We have been given the resources and opportunity to start a new life,” he said.

“While I will cherish memories of Syria, the future for my family is here in Australia,” Johnny said.