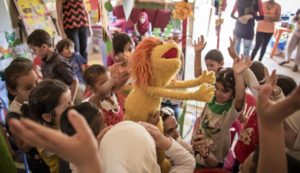 A Muppet named Tonton is spreading joy among children living in refugee camps in the Middle East.

TV icon Sesame Street is working with aid organisation The International Rescue Committee to help millions of refugee children around the world learn, grow and thrive.

Tonton, a diminutive orange puppet, has become the focus of one of these efforts to bring hope in the form of education to the millions of children whose lives have been torn apart by the war in Syria.

More than 5 million people have fled Syria since 2011, making it the largest humanitarian crisis of our time. Many seek shelter in refugee camps in neighboring Lebanon, Turkey and Jordan.

“These are children with the ideas … to make something of their lives, and we’re determined to give them the chance,” said David Miliband, CEO and president of the IRC.

Earlier this year Sesame Street characters Elmo and Grover traveled to a refugee camp in Jordan to meet with some of the kids who now call the camp home.

Now the children in those camps have a Muppet character to call their own.

“Education is a haven for people who have lost everything. And for children it gives them just an ounce of normality that can give them a chance to rebuild their lives,” Mr Milliband said

The program will see a new version of Sesame Street, in Arabic, aimed at reaching children in Syria, Iraq, Lebanon and Jordan, especially refugee kids.

It will also establish a caregiving program delivered through home visits and mobile messages. And it will create an early learning program that provides teachers and facilitators with educational content and lesson plans.

“We will also do what Sesame Street does best, and that’s modelling inclusion, and acceptance,” said Sesame Workshop spokeswoman Sherrie Westin.

There are already Sesame Streets across the world and Sesame Workshop often develops new Muppets – local characters that are created to address the needs of that culture.

From Galli Galli Sim Sim in India, to Plaza Sesamo in Mexico and Zhima Jie in China, there is the same kind of Muppet magic on six continents, reaching countless children.

“It’ll be in their language, their culture, and that’s where I think we have the greatest impact,” Ms Westin said.

In Afghanistan, where only a third of girls are educated, the character is a female.

“When we created our first local Muppet in Afghanistan, we thought long and hard, but we knew she was going to be a girl,” Ms Westin said.

“Little boys who watch test 30 percent higher on gender equity, thinking it’s OK for their sister to go to school – and that’s the power of media and the Muppets,” she said.