Melbourne Syrians supporting victims of war and COVID at home

Members of Melbourne’s Syrian community have launched a campaign to support the children of families in Syria who are falling into poverty and destitution as a result of a decade of war and the COVID-19 pandemic.

Recent pandemic restrictions, the collapse of the Syrian economy and the displacement of millions of people have led to an unprecedented number of families in Syria who are no longer able to put food on the table or make enough money to afford basic necessities, aid agencies say.

In response, as the ten-year mark of the start of the Syrian conflict approaches, Melbourne’s Syrian community is raising money for a charity based in Damascus that supports the children of families in financial difficulties. 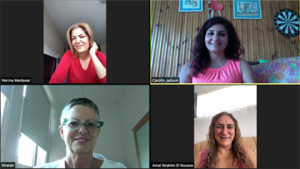 “The plan is to help to families who are struggling to provide for their children,” said Ms Medawar, a former AMES bi-lingual research assistant.

“Kids from all religious backgrounds have suffered as a result of the war and the COVID-19 pandemic has made things even worse,” she said.

The group has produced video clips to explain the size and scope of the humanitarian crisis in Syria.

“We want people to know that even though most of our attention is currently focused on the pandemic here, in Syrian there is a massive humanitarian crisis emerging,” Ms Medawar said.

Aid agencies say staggering 9.3 million Syrians are now going to sleep hungry and more than another two million are at risk of a similar fate – part of an overall rise of 42 percent in the number of Syrians facing food insecurity in the past last year.

Millions of Syrians are now in desperate need of help. According to the UN, $3.29 billion was required to meet the urgent needs of the most vulnerable Syrians in 2019 — but only about half of that has been received.

Since 2011, over half of Syria’s pre-war population – more than 12.7 million people – have been forced to flee their homes due to conflict.

“Unemployment is close to 50 per cent, compared with 42 per cent the previous year and food prices are 240 per cent higher than in June 2019,” Sir Mark said.

“More than nine million people in Syria are living with food insecurity – with over two million more, at risk of joining them,” he said.

“We know that many internally displaced Syrians have sought refuge in Damascus putting added pressure on the city’s infrastructure and services,” Sir Mark said.

“We know 2020 was a difficult year for everyone in Australia and we understand if you can’t help us right now, you might still be interested in learning a little more about life in Syria today,” Ms Medawar said.

“We are devastated by the current situation and while Syrians throughout the country are struggling to access the basics,” she said,

The group has a personal link to the St Paul’s Catholic Church childcare centre, and know the challenges it is facing to deliver much needed community services.

“We are connected through our friend Caroline who has cherished memories of her childhood spent with the nuns, and her friends at St Paul’s. She remains in touch with the nuns to this day,” Ms Medawar said.

St Paul’s Church provides childcare to approximately 150 children aged 3 to 6 years, and more recently mental health programs to 100 children aged between 6 and 13 years. Children of all religions are welcome at the centre.

To continue providing this critical service to children in 2021 the centre needs help. Any donation is welcome. In Syria, AUD$50 will buy a school bag, shoes, tracksuit and art smock, books, stationery, arts and crafts supplies for one child.

To find out more and also how you can help go to: https://www.mycause.com.au/page/242842/jasmine-project/1