A Case Manager with migrant and refugee settlement agency AMES Australia, Anita says that joining the organisation a year ago has given has given her profound and moving insights into both her father and mother’s diverse ethnic backgrounds.

But recently, those insights have come into sharper focus. 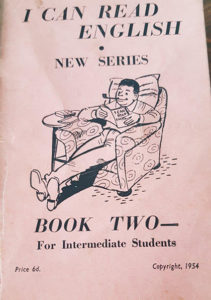 Prompted by a trivia question in an internal AMES newsletter, Anita looked up some old English text books used by her father Riccardo after he arrived in Australia in 1951.

Her research into her father’s past led to the conclusion that he had almost certainly been taught English by AMES teachers at the Bonegilla migrant centre shortly after his arrival.

“After receiving a trivia question about the beginnings of AMES, I did some personal research into my father, a refugee who arrived in Australia in 1951,” Anita said.

“I know he learnt English soon after he arrived and was living in Nissen huts in Bonegilla,” she said.

“I was unsure if he had received English lessons from AMES, until I found one of his English reading books called ‘I can read English’.  I discovered that it was developed by AMES and that AMES had teachers at Bonegilla in the 1950s.

“Ten years later, as a very young child in the early 1960’s my father’s English was great and I remember him reading the daily Herald newspaper.

“Both my parents were multi-lingual and so this wasn’t a surprise to us.

“I feel like the benefits of my father’s experience with AMES has now gone full circle, as I now work supporting the settlement of refugees,” Anita said.

Anita’s detective work has yielded new information about her family and the possessions passed on to her have become even more treasured. 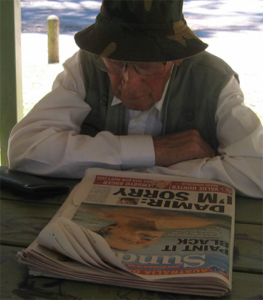 “Dad passed away in 2009 and his things were shared out among the family. One of the things I got were his English books and always kept them,” she said.

“When the trivia question came up about 1951, I knew dad had been in Bonegilla in 1951. They were told they had to take the first job that came up and dad was offered a job in the Philippines working with the army.

“He refused because he said he came to Australia and wanted to stay in Australia. But he was penalised for refusing and sent to the back of the queue.

“His first job was planting pine trees at Renmark in South Australia. There, he met an older Italian man who mentored him. He was told to learn formal Italian and also to learn English, which he did.

“Over his life, he tried a lot of jobs, choosing to work as a carpenter. He was in charge of maintenance at a meatworks in Brooklyn, in Melbourne’s west.

“He was a passionate historian and did a lot of work in his community. He was from Istria, a part of northern Italy that became part of Yugoslavia after WWII. That’s how he came to Australia as a refugee.

“We grew up in Brooklyn, in Melbourne’s west. Dad built our house there. His was a frugal but joyful life. He and some friends from the same part of Italy founded a club – the Famiglia Istriana – in Footscray. The club recently celebrated its 50th anniversary.

“That club became like my family because dad didn’t have any relatives in Australia. I effectively grew up there,” she said.

Anita said her father had an interesting approach to life.

And Anita says that coming to work at AMES has given her an insight into her mother Lidia’s background.

“Mum was Maltese but from Egypt. But Dad’s culture was the dominant one in our house, so I never learned much about Mum’s Maltese background and the Arabic influences on her culture and ancestry.

“But working with at AMES at Dallas, I’ve been met lots of people from that part of the world and it’s been wonderful.

“The past year at AMES has been a good place for me. It’s connected the dots of my family history,” Anita said.

The Bonegilla Migrant Reception and Training Centre was a camp set up for receiving and training migrants to Australia during the post WWII immigration boom.

Set on 130 hectares near Wodonga, the site was a former wartime army base. It opened in 1947 and operated until 1971, during which time it was a temporary home to more than 300,000 migrants.

Estimates say that more than 1.5 million Australians are descended from migrants who spent time at Bonegilla.

And of course Anita’s father Riccardo.