The COVID-19 pandemic is having a devastating impact on economic growth and labour market activity in Australia, and especially so for migrants and refugees, a new analysis shows.

An analysis of recent data from the latest Australia Labour Market Update, produced by the National Skills Commission (NSC), as well as from the Australian Bureau of Statistics (ABS) and the Census, shows a widening gap in unemployment rates between migrants and the Australian-born population.

The analysis, by refugee and migrant agency AMES Australia, shows that the gap has increased to almost two per cent and the sectors hardest by the economic fallout are largely ones that employ a disproportionate amount of migrants and refugees. 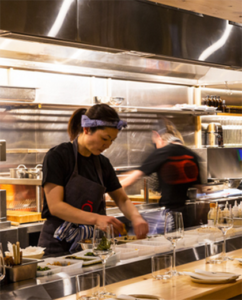 AMES Australia researcher John Van Kooy says that in July 2019, unemployment rates between migrants and the Australian-born population were similar, 5.6 per cent and 5.1 per cent, respectively.

However, his analysis shows that the gap is getting bigger: the July 2020 unemployment rate for people born overseas was 8.5 per cent, while for Australian-born people it was 7.2 per cent.

The analysis shows accommodation and food services has been one of the hardest hit industries by the coronavirus recession—especially in Victoria.

“Almost one in five accommodation and food service workers across the country – 18 per cent, or nearly 270,000 workers –  and nearly one-third in Victoria –  about 31 per cent – have lost their jobs since mid-March,” Mr Van Kooy said.

The analysis found wages in this sector have also dropped by 13 per cent nationally and by almost one-quarter (24 per cent) in Victoria over the same period.

“Accommodation and food services is a key industry for working migrants and refugees. One in five people with temporary resident status were estimated to be working in this industry in November 2019. So this is particularly devastating,” Mr Van Kooy said.

“From Census data we also know that 36 per cent of international students, 29 per cent of working holiday makers, and 19 per cent of bridging visa holders work in accommodation and food services,” he said.

Construction was another significant industry for refugees and temporary visa holders—particularly men, the analysis found.

“This industry has shed six per cent of its workers – or almost 15,000 people – since mid-March, with incomes also falling by 9 per cent,” he said.

“The Census also shows that one-quarter of workers who reported not being able to speak English at all were employed in accommodation and food services,” Mr Van Kooy said.

Australia’s unemployment rate now stands at 7.4 per cent, the highest it has been since November 1998, the update says.

The AMES analysis says unemployment rates for migrants vary appreciably because of several factors, including skill level, age, English proficiency, recent and relevant work experience, and the period since arrival in Australia.

While recently-arrived migrants have a higher unemployment rate than Australia-born people, over time this changes, the analysis says.

Traditionally, newly arrived migrants and refugees have a higher unemployment rate than the general population – about 5.9 per cent compared with 4.7 per cent for the Australian-born population, based on 2019 figures.

But over time migrants and refugees achieve higher workforce participation than the Australian average. Migrants who are citizens have an unemployment rate of just 3.3 per cent according to the Australian Bureau of Statistics.

Recent migrants with Australian citizenship had higher employment rates than those with permanent visas, at 76.2 per cent and 65.8 per cent respectively, the analysis found.

Industries who have had the biggest decreases in jobs since March 14 (when Australia recorded its 100th COVID case):

Industries with the biggest drops in weekly wages since March 14: