The controversial new documentary ‘The Final Quarter’ that charts AFL player Adam Goodes’ battle with racism has been commended by leaders within Victoria’s multicultural communities for the public conversation it provokes.

Filmmaker Jack Darling has said the documentary, which goes behind the scenes of the Year Goodes’ career-ending battle with racism, aims to “be a window into aspects of Australian life we often don’t want to talk about”.

The comments made to AMES Australia this week from community leaders reflected the attitude that elite sport was a powerful starting point for broader conversations around racism, as well as an important space for cultural acceptance in Australia. 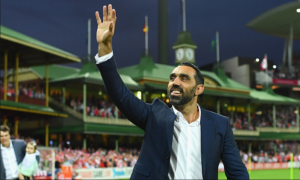 As Jewish Community Council of Victoria president Jennifer Huppert explained, “sport plays such a crucial part in Australian society, so therefore it does serve as a banner for the rest of the community. If you’re seeing these issues in elite sport and its fanbases then it is an indication that there is a problem more generally.”

Throughout his career, Goodes displayed not only the exceptional athleticism and skill which led him to two Brownlow Medals, but also a political awareness shaped by “being the object of racism so many times that you lose count.”

Such is the added dimension of representing a minority community on the big stage, a pressure to be an example for communities that too often lack representation.

In commending Goodes, Islamic Council of Victoria president Ayman Islam highlighted the crucial importance of athlete-role models for his community to access the benefits of Australian team sports.

“From a Muslim perspective we have Bachar Houli and Ahmed Saad, very effective role models that have made our community more comfortable and shown a way forward for our families and kids to take part in football,” he explains.

In Goodes’ case, however, the level of attention reached fever pitch.

In 2013, during a game against Collingwood, Goodes was seen repeatedly pointing to a section of the crowd, having heard a young girl call him an “ape.”

The girl’s age penetrated Goodes’ necessarily thick skin. “To hear a 13-year-old girl call me an ape … it was shattering,” he said.

The resulting furore set of a chain of events that has now marked Goodes as a historic figure in the debate around racism in elite Australian sport.

Goodes became a focal point for racist attitudes. His Wikipedia page was furnished with images of apes, online comment sections were filled with vitriolic slurs, and he was met with persistent booing from opposition fans despite his champion status.

Public figures from Sam Newman and Eddie Maguire in the AFL space, to Alan Jones on radio and various print journalists declared that Adam Goodes was playing the “victim” card, and suggested that the booing was not motivated by race but Goodes’ singling out of the young girl.

Writing about the film this week, former Goodes teammate turned journalist Brandon Jack spoke to the “brave face” with which Adam bore the “emotional toll it was taking on him.”

The three-year period was punctuated with moments of defiance and pride from Goodes, most vibrantly as he performed an indigenous war-dance in celebration of a goal as opposition fans booed him.

These moments, and the words he felt compelled to give, continuously provoked ongoing conversations about racism.

Upon receiving the 2014 Australian of the Year award, Goodes spoke about the choice between acceptance of racist attitudes and educating “ourselves and others about racism and minority populations”.

For this attitude, he was labelled divisive, a phenomenon Ayman Islam said his community recognised and sympathised with easily.

“There were many concerns raised about the way Adam Goodes was treated for standing up- for having a voice that was seen as different to the mainstream,” Mr Islam said.

“That’s not unlike the Muslim community, for instance when (ABC journalist) Yassmin Abdel-Magied tweeted about Anzac Day and was attacked to the point where she had to leave the country. I think we have a real problem with accepting outside voices or those that challenge the status quo,” he said.

These verbal exclusions are often mirrored in society more broadly.

President of the Federation of Indian Associations of Victoria, Sharad Gupta, touched on personal experiences in drawing the line between discrimination in sport and in the community more broadly.

“I have seen many times within my friendship circle, that our children are not given a good chance, even if they have the skills. Many have moved from playing team sports to individual sports such as tennis for this reason.” Mr Gupta said

“Sometimes the racism is not obvious, but it is still happening, you can see this with bias for positions in the workplace as well. It is the same thing,” he said.

In reflecting on the importance of “The Final Quarter”, however, as well as the broader conversation it ignites, it is the following statements from Goodes’ speech that echo most clearly into the present moment.

“…the real reward is when everyone is talking to their mates, to their families and their children, having those conversations and educating others about racism,” he said. “What it looks like, how hurtful and how pointless it is and how we can eliminate it.”

In its portrayal of racism within the crucial cultural theatre of elite sport, “The Final Quarter” continues Adam’s work in provoking these conversations, to the benefit of all Australians.