The poignantly piercing image of a young Rohingya girl that has gone viral on social media and the internet is becoming a symbol of the increasingly desperate plight of refugees across the globe.

As the COVID-19 pandemic exacerbates the dire situations of tens of millions of refugees and displaced persons around the world, the haunting image of Noor Kayas is serving as reminder of this global humanitarian catastrophe.

Noor fled the refugee camp she lived in two months ago boarded a rickety boat that represented the hope of safety and a new life.

Her mother was still arranging the payment when families of other passengers on board received a call to say the boat’s engine had failed. 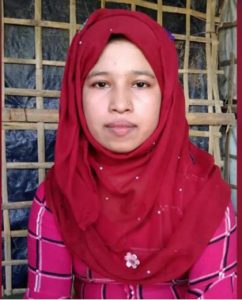 They had been a sea for five days. Now, two months later, the boat is still missing.

There are reports that Noor, along with many others, was fleeing what aid workers say is the increased risk of sexual assault and rape during the pandemic in the world’s sprawling refugee camps, including the one Noor fled at Cox’s Bazar, in Bangladesh, home to more than 1 million displaced people.

The passengers’ families and rights groups are asking why more isn’t being done to save the lives of those on board.

They say Indian and Bangladeshi authorities were alerted to the passengers’ desperate cries for help on February 20, but took 48 hours to respond with medicines, food and water.

While they waited, nine people died, the families say.

The boat’s disappearance is compounding the misery of families in Cox’s Bazar, where lax security is allowing militants to enter the camps at night to attack women and girls, according to rights groups.

The UN refugee agency UNHCR says that over the past year, more women and girls have boarded unsafe vessels to flee sexual violence within the camps – a trend likely to continue as the coup across the border in Myanmar makes returning home an even more distant prospect.

Noor was 12 when she and her family fled a military crackdown in their village in the Maungdaw district of Myanmar’s Rakhine State in 2017.

“Our village was burnt down, and my brother was killed, we had to flee,” Noor’s mother Jaan told local media.

“Noor never liked it here. She always wanted to do something more, but we can’t send girls anywhere here. They get picked up and raped. I think that’s why she left with the trafficker,” said Jaan, who works at a hospital run by the charity CARE Bangladesh.

In the past year, the camp has become a more dangerous place. Aid groups say abductions by local gangs, sexual violence and trafficking have become more frequent, while COVID-19 lockdowns have shut down the only safe spaces for women and girls.

Family member say the boat had enough supplies for a week, the time it would usually take to travel from Teknaf to Malaysia.

After the boat’s engine stopped on February 16, food and water supplies ran low. Over the next few days, the boat drifted closer to Indian waters.

On the morning of February 20, one of the passengers reported to his brother that the boat was in the Bay of Bengal and the water had run out.

Passengers also called non-profit organisations and journalists for help. And their families said the GPS coordinates sent from the satellite phone placed the boat a few nautical miles from Indian Coast Guard headquarters in the Andaman and Nicobar Islands – an Indian territory in the Bay of Bengal.

The next day, on February 21, a ship with Indian flags passed the boat, but did not stop, the passengers told their families via satellite phone.

The same evening, two helicopters hovered near the boat, close enough for passengers to read the word INDIA on its side.

A few hours later after the helicopters departed, two Indian Coast Guard ships pulled up near the boat. But the passengers told their families the ships didn’t make contact with them or offer any food or water.

Nine people died that day, the passengers told their families, including a man who drowned after jumping overboard to try to swim to the Indian Coast Guard vessel as left the area.

The next day, on February 22, Indian Coast Guard ships returned with food and medicine. But no one was allowed to get off the boat, the refugees told their families via satellite phone.

That was the last time anything was heard from the boat.

Time is running out for the people Noor’s boat, if it has not already.

There is no current search underway for the vessel. And even if the passengers are found alive, then comes the question of who will take them in.

All countries are bound by international law to rescue and disembark those in distress at sea. But there have been several recent cases where some countries in Southeast Asia have refused to help.

In March 2020, a larger boat carrying almost 300 Rohingyas set sail from Cox’s Bazar. The passengers spent more than six months adrift at sea and were turned away by several countries before finally being accepted by Indonesia. By then, at least 30 people including women and children had died.

Noor’s boat was heading to Malaysia, but last year Malaysian Prime Minister Yassin said the country would no longer take in Rohingya refugees.

Malaysia is not party to the UN Refugee Convention and does not have an asylum system regulating the status and rights of refugees.

So, it seems that the fate of Noor and her fellow refugee passengers is nobody’s business and everyone’s.