One per cent of global population now displaced – UN report

Forced human displacement has reached devastating new levels with one in 97 people on the planet now forcibly displaced, according to a new UN report

Around 79.5 million people have had to leave their homes as a result of persecution, violence and human rights abuses, among which 4 in 10 are children, according to the annual Global Trends 2019 report by the UN’s refugee agency UNHCR.

This growth in displacement is outpacing global population growth.

The main points of the report include that there are now 26 million refugees with 20.4 million under UNHCR’s mandate and about 5.6 million Palestine refugees under UNRWA’s mandate.

Forty per cent of the displaced are children. 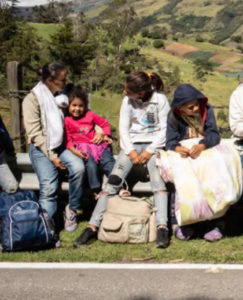 Over the past decade, at least 100 million people were forced to flee their homes with only a fraction of them finding a solution, the report says.

“We are witnessing a changed reality in that forced displacement nowadays is not only vastly more widespread but is simply no longer a short-term and temporary phenomenon,” said Filippo Grandi, the UN’s High Commissioner for Refugees.

The vast majority of refugees and displaced people are hosted in developing countries, and more than a quarter of them found asylum in the “least developed countries.”

Despite investments to speed up asylum applications at UN and national level, the end of 2019 saw more than 4 million cases still pending.

These numbers are compounded by the scarcity of solutions, the report said. In 2019, only half a percent of the world’s refugees were resettled and as conflicts tend to drag on over longer periods of time, voluntary repatriation becomes a less viable solution, the report found.

The report says forced displacement has almost doubled since 2010 when 41 million were displaced compared with 79.5 million now.

It says 80 per cent of the world’s displaced people are in countries or territories affected by acute food insecurity and malnutrition – many of them countries facing climate and other disaster risk.

More than three-quarters of the world’s refugees (77 per cent) are caught up in situations of long-term displacement – for example the situation in Afghanistan, now in its fifth decade, the report says.

More than eight of every 10 refugees (85 per cent) are in developing countries, generally a country neighbouring the one they fled.

The report points out the 2030 Sustainable Development commitment of “leaving no one behind” now explicitly includes refugees, thanks to a new indicator on refugees approved by the UN Statistical Commission.