Opportunity and a new life for refugee family

Bushra Mansour and her family are what successful refugee settlement in Australia looks like.

Four years after arriving in Australia, the family has bought a house in Craigieburn, in Melbourne’s north, Bushra and her husband Jerjus are both in work and their three children are either part way through or have completed tertiary education courses.

Over summer, the three children are working casual or temporary jobs.

The family is waiting on their Australian citizenship applications to be processed and their English has improved out of sight.

The COVID-19 pandemic interrupted their settlement journey and has given them pause for thought. 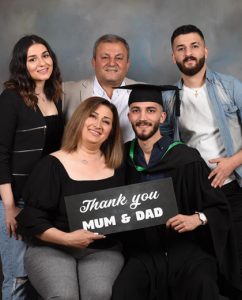 “We feel happy in Australia, this is our country now and we are glad that our children are living in a safe country, safe from war and COVID and they have opportunities in their lives,” Bushra said.

The family’s settlement journey began in 2014 when they were forced to flee their home in Suqaylabiyah, a largely Christian city in western Syria, where Jerjus had worked for 28 years as a maths teacher and Bushra for 20 in engineering administration.

“Life became very hard for us. There were terrorist bombings, rockets were falling and we were scared to travel within Syria because there was no safety,” Bushra said.

“Also, things became difficult because there was no petrol and sometimes not water, gas or electricity,” Jerjus added.

Also, Bushra and Jerjus’ eldest son Nagy was travelling an hour each way every way to the nearby city of Hama where he was studying dentistry.

“We were very worried that he might be kidnapped or killed as he was travelling,” Bushra said.

The family fled to Lebanon where life was little better.

“Life was still difficult in Lebanon where we could not work and our kids were not allowed to study,” Bushra said.

“When we realised we might have a chance of coming Australia, Nagy studied Year 12 by himself, without any formal school and passed the exam,” she said.

The family arrived in Australia in 2016 but things were far from plain sailing. But with support from migrant and refugee settlement agency AMES Australia and their own community, the family have found happy and fulfilled lives.

“Before we came, I had a dream that I would learn English in a year and start work. But we struggled with English and could not get the jobs we wanted,” Bushra said.

“Every job I applied for required local experience and we didn’t have any experience. But where could I get experience if no one would give me a job,” she said.

But after years of work and study, the couple have established new careers.

She works as a Teacher’s Assistant in schools across Melbourne’s northern suburbs.

He works as carer with the NDIS six or seven days a week and has worked throughout the COVID lockdown supporting his vulnerable clients.

“I love my work. It is very rewarding and I have formed friendships with my clients,” he said.

While studying for his qualifications Jerjus worked in family day care and as an Uber driver.

Bushra and Jerjus’ eldest son Nagy has completed a Bachelor of Biomedicine and hopes to study dentistry in the future. During the summer he is working installing cabinetry.

Second son Rabi studying engineering and working as a hairdresser over the summer while Daughter Tala has just completed the first year of a commerce degree and is working at a local Hungry Jacks outlet.

Several of Bushra and Jerjus’ siblings have also settled in Melbourne as well as Bushra’s father, who she visits every Sunday. And more than 70 people from their village have found new lives in the city.

“It’s very nice to have family around, it makes life easier. We are enjoying life and everything is good. All of my family are happy and safe here in Melbourne and we are looking forward to Christmas,” Bushra said.

“My kids all speak English well. They are all following their ambitions and have good futures here,” she said.