Refugee-run businesses are proving resilient and innovative in the face of the economic downturn caused by the COVID-19 pandemic, new data shows.

An audit of small businesses last year found that more than 300 had been opened by refugees in Melbourne and Sydney over the previous two years.

Since trading restrictions were imposed in March effectively because of the COVID-19 lockdown, a follow up audit found just 11 per cent of these businesses had stopped trading or reduced their turnover by more than 70 per cent.

This compares with Australian Bureau of Statistics (ABS) figures which show that across the whole economy 43 per cent of businesses have had to sack workers or place them on unpaid leave. 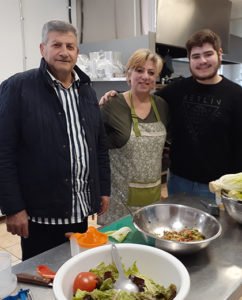 The ABS figures show two-thirds of businesses across all sectors reported taking a hit to revenue or cash flow due to COVID-19. Roughly the same number reported they had suffered decreased demand.

Two in five businesses said they had changed how they delivered goods or services, one-third said they had renegotiated their leases, and one in four had deferred loan repayments.

By contrast, refugees businesses typically cited their lower costs and ability to adapt to cope with COVID-19 restrictions as reasons for their continued success.

The audits by migrant and refugee settlement agency AMES Australia and not-for-profit micro-finance provider Thrive shows many refugee-run businesses are weathering the downturn.

Attalah Abo, who runs the Shamiat Syrian restaurant in Northcote, in Melbourne’s north, says that adapting to the COVID-19 restrictions has meant the family restaurant has stayed open and kept employing people.

“It got more difficult with the COVID restrictions but we changed the way we work and focused on takeaway. We’ve also taken the opportunity to renovate the restaurant,” Attalah said.

“It’s going well with takeaway and we have managed to keep employing our three staff. They are amazing people and they have become part of our family,” he said.

“The COVID changes have been hard but there are many people suffering more than us. We are grateful to be here in this country and we are grateful for the support of the local people here; and also of the Australian people and government,” Attalah said.

Cosmetics entrepreneur Fadi Abo says that selling online and targeting a global a market has meant his company ‘Clarcias’ has been able to keep trading through the pandemic.

“The COVID-19 pandemic has obviously been tragic but we’ve had a rush of orders because people are staying at home. We are making it easier for customers with free shipping and a 60-day money back guarantee,” Fadi said.

AMES Australia CEO Cath Scarth said there was strong evidence to show refugees were not only more likely to start a business than most Australians but also make a success of it.

“The ABS and the OECD have produced research that shows refugees are incredibly entrepreneurial and have a resilience that comes from surviving difficulty,” she said.

“We have supported a significant number of our refugee clients to start their own businesses to achieve economic participation and independence. In many cases they have started businesses when they have been unable to find permanent and durable employment,” Ms Scarth said.

Thrive Executive Director Huy Truong said the organisation had been created to support refugees and asylum seekers start their own businesses.

“As a result, they create self-employment, become financially independent and integrate faster and more successfully as active contributors to our society and economy,” Mr Truong said.

In just under two years, Thrive lent more than $2 million to refugee entrepreneurs.

ABS data shows humanitarian migrants or refugees, while only making up 4 per cent of the migrant population at 31,728 people, are almost twice as likely to start a business taxpayers as a whole.

An Organisation for Economic Cooperation and Development (OECD) report also found migrants and refugees were often more entrepreneurial and more likely to start a business or work for themselves than natives.