Refugee doctor’s search for a future 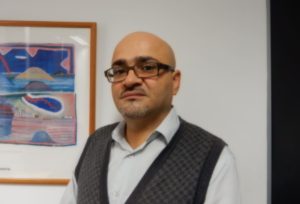 Iraqi refugee Dr Ayad Jbreeta says that there is a saying in his country: ‘Today is worse than yesterday but it is better than tomorrow’.

He says it sums up the pain of a nation that has been wracked by war, repression and sectarian violence for decades.

In his 42 years, Dr Ayad has lived through three wars and was forced to flee his home as ISIS invaded his city.

As a hospital surgeon, he treated the victims of the latest conflict to beset his homeland and even tended the shattered, lifeless body of his best friend’s son.

Now living in Melbourne and trying to resume his work in medicine, Dr Ayad shared his story in the hope that Australians will not forget the plight of his people many of whom are either subject to violence and discrimination in Iraq or languishing in limbo as refugees in Lebanon or Turkey.

“As a child I grew up in Kirkuk, in northern Iraq, as part of a community of Assyrian Christians. There was almost never a time when things were safe and peaceful,” he said.

“We had the Iran-Iraq War for eight years in the 1980s and after that the 1990 Gulf war when Saddam invaded Kuwait,” Dr Ayad said.

“Economically things were very bad with the international sanctions imposed on Iraq after the war.

“My father was an academic, he taught engineering but his income was very low and he had to work as a taxi driver also.

“It seemed for us in Iraq the future was always black and we could never predict what would happen,” he said.

Dr Ayad started his university studies in 1995 but with five brothers and sisters also studying, it was very difficult for his family.

“It was very hard for my father to afford to have us all studying so we had to work as well as study. I did everything. I worked in sales, I was a labourer, I did many jobs,” he said.

“After Saddam was gone financially things got better in Iraq and we dared to think that maybe we would have a better future,” Dr Ayad said.

“After Saddam we thought that perhaps things would change and we would be able to enjoy our lives,” he said.

“But the security conditions deteriorated day by day and it became clear there was not going to be a safe life in Iraq. At this time there was just militia and killing and discrimination and things got worse.”

After the second Gulf war Dr Ayad and his family moved to Qaraqush, a largely Christian city on the Nineveh Plain.

“We had to leave Kirkuk as the terrorists started to threaten the Christians in the city and we felt unsafe,” he said.

At the same time, Dr Ayad began studying for his PhD in Baghdad. This meant five hour trips between the capital and his home twice a month.

“It was very dangerous and many times there were explosions or shelling on the road. I lost many friends in the violence that came after Saddam was gone,” he said.

In April 2014, he had just completed his doctorate in general surgery and keyhole surgery when conflict and violence again upended his life.

An attack by the Islamist militant group ISIS on the town of Qaraqosh, where Dr Ayad lived, rocked him to his core and led to him and his family to flee and leave behind everything they had known.

“It was on August 5, 2014, while I was the surgeon on call at the local hospital when the shells began to fall on my town,” he said.

“ISIS had started to attack. There was fear among the people and they began to flee outside the city towards Kurdistan, in the north,” Dr Ayad said.

At 10am the hospital received a group of wounded patients including five children and a women. Some had arrived at the hospital dead.

He is still haunted by the sight of one of the victims – a child caught in an explosion whose remains amounted to just two hands and two feet.

“It was terrible. Even after all of the years of war we had seen in Iraq, this was heartbreaking and I found out later that the boy was the son of a dear friend of mine,” Dr Ayad said.

He treated the survivors and transferred them to safer hospitals but his thoughts turned to his own family and he was faced with an impossible dilemma.

“I became worried about whether I would have to leave the hospital and take care of my family and children and escape to a safe area – or to stay in the hospital to help the people of my city in this horrible situation,” Dr Ayad said.

“Meanwhile, my wife called and told me that the shells had started falling near out house. I told her to leave the house and take the children to her sister’s house which was in an area that was still safe.

“I stayed at the hospital until the evening when the Kurdish army told us they would withdraw because the area had fallen into the hands of the terrorists. It was clear to me that we had to leave everything and escape to a safe area,” he said.

Dr Ayad and his family left almost immediately for Lebanon and, for 36 months, they lived in limbo there.

Dr Ayad volunteered at a refugee health clinic where he performed more than 150 minor operations on fellow refugees.

“I wanted to help people who could not afford medical treatment in Lebanon. Typically surgery in Lebanon wold cost three to four thousand US dollars. And these people, if they had a job, were earning maybe just $US300 per month. So I did what I could for them,” he said.

Eventually, Dr Ayad and his family, who are Assyrian Christians, were part of the 12,000 extra refugees Australia took in from among minority groups displaced by the conflict in Syria and Iraq.

They arrived in Australia in February 2017.

“I knew about Australia because my sister has lived here for many years,” he said.

Dr Ayad is now trying to re-establish his medical career. He has met or passed the English language requirements and most of the clinical exams needed to work as a doctor. He has one more exam to pass and then he must find a job as a hospital resident to be able to re-launch his career.

He says he is grateful to the Australian government and people for their support.

“We arrived here as refugees with no money but with the support of the Australian people and of AMES Australia I am hopefully about to start my career here in Australia,” he said.

“But I would like to remind people that many of my people are still suffering and they need help just to live in one of the most dangerous areas in the world,” Dr Ayad said.