A family of Iraqi refugees has just completed two-week of self-isolation since arriving in Australia after the March 15 COVID-19 pandemic curfew.

But the ordeal of being cooped up is nothing compared to the turmoil they experienced when forced to flee their home in the face of attacks by the terror group ISIS.

Even as the COVID-19 pandemic invades every sphere of life, Revan Jirajees, her husband Rafi Matloob and their three-year-old son Yusef are grateful and happy to have reached Australia and safety.

“The fourteen days of isolation was difficult. We weren’t expecting it and we didn’t know it would happen when we arrived but and we managed to get through it,” Revan said.

“Of course we understand that we had to isolate for our own benefit for everyone’s benefit. The isolation was not just for ourselves but for the safety of everyone,” she said.

The family settled into a routine to help pass the time. 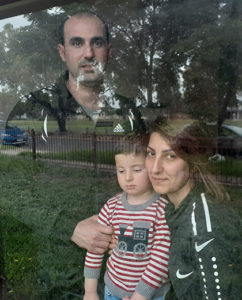 “After breakfast we did some exercise and then watched some cartoons with Yusef. Then we would prepare lunch and have an afternoon sleep,” Revan said.

“After that we would watch some TV and then play in the back garden with Yusef.

“But now we are looking forward to getting out a little bit and going shopping and we have some appointments,” she said.

It was at 3am one morning in June 2014 when Revan and her family were forced to flee their home in a village near Mosul, in northern Iraq, as the brutal militant group ISIS attacked.

“It was three o’clock in the morning and we were told the army had left and ISIS was coming. The whole village took what they could from their homes and left,” Revan said.

“ISIS came and destroyed everything. They burned our village and took our belongings. We were left with nothing,” she said.

Revan and Rafi had been married just six months when they, and most their village, fled – finding refuge in the Kurdish-controlled city of Irbil, to the west.

They stayed with Rafi’s uncle for a month and then moved into a camp arranged by their Assyrian Christian church with up to three families living in small houses.

Finding work was difficult in Irbil because the couple spoke no Kurdish. For a time Revan worked as a front office manager using her English skills and Rafi found some work as an engineer. During this time, Yusef was born.

But, when the church organisation ran out of money, the family was left with the choice of either going back to their village and trying to rebuild their lives or leaving Iraq.

“In our village, everything was gone. There was no money, there was no work. And there was no peace, the security situation was very bad. So we decided to leave Iraq,” Revan said.

Early last year, the family moved to Lebanon. Just weeks ago they arrived in Australia as refugees sponsored by Rafi’s sister who have lived in Melbourne for several years.

“We don’t know a lot about life in Australia because we haven’t been out. But we are keen to learn and to improve our English,” Revan said.

She said she feared for her family still in Iraq and her brother in Lebanon, whom she wants to bring the Australia.

Rafi’s family are scattered across the globe. His parents are in the US, he has a brother in Germany, two sisters in the Czech Republic and a sister here in Australia.

The couple say that, like everyone, they are concerned about the COVID-19 pandemic but feel lucky to be in Australia.

“The pandemic is scary, sure, but what can we do? We are just praying that everything will turn out OK for everyone,” Revan said.

“But from the first time we arrived here in Australia, we felt like it was out new country,” she said.

“We have big ambitions. I want to find a job and work. In Irbil I worked as an office manager and Rafi has worked as a builder and an engineer.

“People have been kind and there is lots of support. Everyone is equal here and there are no religious differences like in Iraq.

“We are very happy to be here and we feel like we have given Yusef a future,” Revan said.