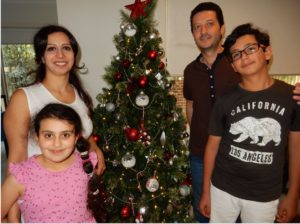 Until war came to their country Hassan and Shaza Matni had perfect lives.

Living in the centre of the beautiful and ancient city of Homs, the couple had successful careers – Hassan as an engineer and Shaza as an architect.

They owned their house and had active social life and doted on their two children.

“Our life was successful. I had a very good job as an engineer,” Hassan said.

“In the last two years for the war I had my own company and contracted for work,” he said.

“At that time we would never have thought about leaving Syria. We owned a house, we both were happy in our work,” Hassan said.

The Matni family lived in a largely Christian enclave in the city.

But when war came in 2011 everything changed.

“People who were our neighbours before the war became extremists. Some of these people used to visit us socially,” Shaza said.

“We just don’t know what happened. Suddenly they became violent and were inciting others to take up the mentality of ISIS,” she said.

The couple believe that forces outside Syria were supplying these newly minted extremists with weapons and money.

“There was a lot of money involved. You need a big budget to start this kind of violence. You even had satellite channels telling the terrorists to kill Christians and burn everything.

“Meanwhile, our government said we should continue life as usual,” Shaza said.

But that was easier said than done and even the school pick up became a life and death exercise.

“M my son’s grade one school called and said ‘come and get you kids – we can’t protect them’,” Hassan said.

“I was literally running to pick up the kids,” he said.

At this time around 200,000 Christians began leaving Homs. One Christian area called Hamidie was surrounded by Sunni terrorists who were attacking Christians and occupying empty buildings.

On one occasion as he drove from work to home, Hassan passed through a virtual battle zone.

“The next morning we packed a few things and we left. Our area was occupied by terrorists for the next two years and our home was destroyed.

“We lost everything,” he said.

The family moved to Tartous a, a relatively safe city on Syria’s Mediterranean coast.

Hassan got a short term contract to work as an engineer in Nigeria while Shaza and the children stayed behind.

During that time, the family’s car was stolen.

And, when Hassan retuned home things had worsened in Syria.

“Life was very difficult. The security situation was getting worse – there were two large bombings in the city – so things were not safe anymore and things were very expensive,” he said.

“We were living to just to sustain life. We had not real hope for the future and we didn’t know if we would survive the next week. And for Christians it became very dangerous to stay and impossible to leave because the government would not give us visas,” Hassan said.

Eventually, the family was able to get to Lebanon where they lived a precarious existence.

“We were in Lebanon for eight months and life was terrible. We could not work and we spent all of our savings just to live. Our kids could not go to school,” Shaza said.

“We were just waiting for the chance to leave,” she said.

In 2016 the family were granted a humanitarian visa and came to Australia last year.

“We are grateful to be here, the people here are very friendly and welcoming,” Shaza said.

“Our kids love the school they go to. They have settled well and have made new friends and we are trying to connect more with the broader community here,” she said.

Shaza volunteers at the school and daughter Rita recently sang in a school festival. Hassan is a member of the Choir of Hard Knocks.

But the Matnis worry about their parents still in Syria and Lebanon.

“We worry about them and we would love to be able to bring them to safety,’ she said.