Iranian refugee Hadi Mohammadi has carved out a “dream role” for himself playing and teaching music to residents in care homes in Melbourne’s north.

Hadi, who was part of AMES Australia’s ‘Voices Without Borders’ choir, struggled to find work in Australia after fleeing his homeland in 2013.

He was jailed and tortured by the Iranian regime for playing western music and offered the choice of either giving up his dream of carving a career and a life out of playing the saxophone or risk ending up in jail – or worse.

The crackdown on secular music by the authorities in his homeland – and the fact that he had been arrested and locked up several times – left Hadi no choice but to gather his family and flee.

Hadi and his wife and child caught a plane to Indonesia and found a people smuggler to take them to Australia by boat.

“I could not stay in Iran after the government cracked down on musicians. The only places we could play were in underground venues – sometimes literally in cellars,” Hadi said.

“I am a musician – it is all I know how to do. Once I had been arrested a couple of times I was a marked man for the government. I knew they might come for me at any time,” he said.

But after gaining a work placement at a nursing home, Hadi has secured regular work as an activities officer, mostly teaching and playing music.

“I love my work and the residents have become like family. I’m very happy, my work means I can help people and play music,” he said.

He has even taught one 82-year-old resident to play solo piano.

The resident, Melville Adams, says Hadi is an inspiration.

“He is a great teacher and he inspires us to learn music through his own enthusiasm,” Melville said.

Now safe and building a new life in Melbourne with his wife and two children, Hadi remembers the dark days of life in Iran.

“If I wanted to live – if I wanted a life, I had to leave,” said Hadi, who studied the saxophone in the UK.

He said the boat journey was a 13-day ordeal with rough weather and sickness among the passengers.

“It was very bad and I was afraid for my family but I didn’t have any choice if I wanted to have a safe life and live my dream to play music,” Hadi said.

Since the establishment of the Islamic Republic of Iran, music has been the subject of fierce political and religious debate in Iran. Its legal and social status has changed constantly and continues to be the object of various restrictions because of music’s purported power to seduce and corrupt.

From early on, the official position of the Islamic regime was unmistakable. All concerts, and especially all radio and television broadcasts of foreign and Iranian, classical and popular music, were banned.

The only genres of music acceptable in the Iranian republic are Iranian folk music; Iranian classical or “traditional” music and a heavily censored form of pop music that is almost universally unpopular with young people. 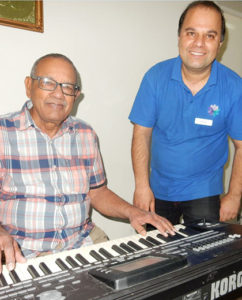 Under these strict rules however, an underground music culture has flourished. The very intention of abolishing music in public life has unexpectedly led to the practice of music groups forming within family circles or among people of the younger generation of all social classes.

In January, five Tehran musicians were arrested and jailed on charges of collaborating with LA-based musicians and satellite channels. The police raid was apparently prompted by the recording and distribution of a song with political content that the regime found objectionable.

“In Iran there are rules about everything. If you want to play or record music, you have to get permission but there is a lot of corruption so it’s not that easy,” Hadi said.

“Even if you think you have got permission, the government can come along and stop you and lock you up and even accuse you of terrible things like being a traitor, being an infidel,” he said.

“In Australia there is freedom to play whatever music you like. I am playing with three very good groups and I feel very good about this,” Hadi said.

“Here people appreciate many kinds of music and I hope I can work as a musician one day,” he said.