As an asylum seeker without the right to work in Australia Liaquat Ali was struggling to support his young family and even put food on the table.

But the ethnic Hazara, who fled persecution and violence in his homeland, turned to his entrepreneurial skills to make ends meet and carve out a life for his family.

Now, five years on, Liaquat is running three successful businesses in Melbourne’s south east and he employs more than 20 people, mostly other refugees.

Liaquat, now 37, arrived in Australia in March 2013 with his wife and seven-month-old son after a boat journey from Indonesia.

They had fled their home in Quetta, in northern Pakistan, at a time when violence flared against ethnic Hazara in Pakistan.

Extremist groups targeted the Hazara, particularly business people, teachers and students and thousands were killed in a concerted campaign that began around 2001.

Liaquat’s family moved to Quetta from the ancestral home in Afghanistan in the early 1960s because of persecution there.

“Everyone has a different story but we were persecuted in a state sponsored campaign in Pakistan. For my family’s safety, we had to leave,” he said.

Liaquat’s father was a successful businessman and he and all of his eight siblings were well educated. Liaquat studied political science and sociology at the University of Baluchistan.

But in 2009 the violence against the Hazara ramped up and Liaquat was among many young people who feared they would be targeted in Quetta and so escaped.

He and his young family went first to Malaysia and then to Indonesia where they boarded a boat to Australia.

The boat was intercepted and they were detained on Christmas Island for three months and then briefly in Melbourne.

“In the beginning, it was quite hard after being released, we had little government support – just $410 per couple and $122 for my son each fortnight.

“We couldn’t even rent a house at the time. I wanted to work but did not have the right to do so for two years. We struggled to live,” Liaquat said.

At the end of the two years Liaquat started as a trade apprentice in a construction business.

“In six-to-nine months I learned how to work in the industry and I started my own rendering business with an old ute and few tools,” he said.

“We worked hard for a year and after that we gained a reputation for doing good work,” he said.

Now Liaquat employees 12 people in his rendering business Brother Rendering Services. He has also opened a kebab shop in Hampton Park and a juice bar.

“I managed to make some money so I bought the kebab shop last year and now there are eight people working in the shop,” he said.

“I am happy to be able to give people a chance to earn a living. They are mostly migrants – from Afghanistan, India, Pakistan and Sri Lanka.

“I want to be an example to other refuges and asylum seekers. People should not rely on social services forever. They should work or establish their own business.

“Australia is a land of opportunity. It’s just up to the individual,” Liaquat said.

But Liaquat’s life in Australia is still not without its challenges. 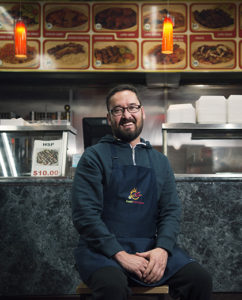 Recently, he was caught up in an internet trolling incident when he offered to help victims of the recent Gippsland bushfires.

“Basically I was watching news of the bushfires on and off all day and I saw there was a fire near Nar Nar Goon and Drouin,” Liaquat said.

“I had worked in construction in the area and without thinking I decided to publish a Facebook post offering that people could stay in my house while they were forced out of their own homes,” he said.

“I wasn’t expecting that something would go wrong but then I started receiving text messages saying that this was a scam or a political game.

“But I knew what it was like to be a refugee and to have to flee from your home and I wanted to help Australians because we owe this country a debt,” he said.

A friend sent Liaquat an online story in a metropolitan newspaper that also claimed his offer as a scam.

He was then trolled online because of the unkind comments about his offer.

“In the beginning it was disappointing but I got thousands of messages and texts from people in Melbourne’s south east saying that I was a good person and generous – and that made me feel better,” he said.