A refugee family forced apart by conflict and economic necessity is now reunited in Australia and building a new future together.

To make a living Syrian refugee Habib Abdo Kammoush was forced to work overseas away from his family for 12 long years.

He spent gruelling stints building roads in Nigeria and maintaining forestry equipment in the jungles of the Central African Republic.

But when the war in his homeland closed in on his family Habib was forced to give up his job and take them to safety.

Now resettled in Melbourne, he has used the experience and knowledge he gained across the world to start his own heavy machinery repair business. 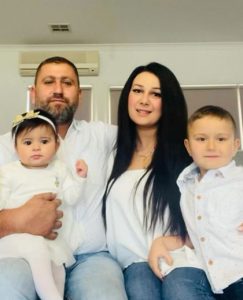 “I started the ATK Mobile Plant Mechanic business in January 2021 and it’s going very well. I’m getting work all over Melbourne. I go out and repair equipment on site,’ Habib said.

“I work with heavy machinery, construction equipment, earthmovers and generators,” he said.

Habib almost has diesel fuel in his blood, growing up in a town where heavy machinery repair is a major industry.

“I started learning about mechanics when I was 12 years old working in the summer holidays in workshops in my home town,” Habib said.

“The town, Maharada has many workshops that specialise in Caterpillar equipment,” he said.

Habib worked in Syria between 1997 and 2006 when he moved to Lebanon to take up a job and then to Nigeria to work with an international road construction company.

Between 2016 and 2018, Habib worked in the Central Africa Republic with a forestry company shipping timber to Europe. Wanting to be closer to home, he then found work in Iraq, helping to rebuild infrastructure shattered by war.

“During this time the war in Syria was far away from my family,” he said.

Habib would meet his wife Eve and young son Abdo in Lebanon every seven or eight months. 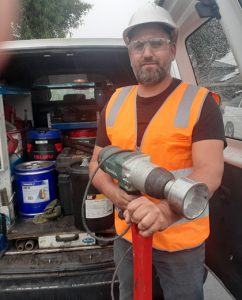 But as the conflict in Syria escalated Habib became more concerned for his family’s safety.

“One day a bomb blast killed an entire family near to where my wife was living. I was not comfortable that my family was safe anymore so we took the decision to leave,” he said.

Eve said the incident was a turning point also.

“It was very frightening. I had my young son with me when the bomb hit. I was worried about him and I knew it was time to go somewhere where my children could have a safe future,” she said.

During the conflict, Maharda was targeted by the US-backed rebel group Jaysh al-Izza but remained under government control.

The attacks reached a peak during the course of the 2017 Hama offensive which saw suicide bombers detonate car bombs and open fighting between the Syrian army and rebels.

The rebels seized several nearby villages but were beaten

The family moved to the relative safety of Erbil, in northern Iraq, and applied for refugee status. They arrived in Australia in November 2021.

Since arriving, Habbib and Eve have had a daughter Tia, now nine months.

“The first few months were very difficult for us. Everything was new and there is no one from our town living here. We have no family here, I have a brother in Nigeria and my parents are still in Syria,” Habib said.

During the COVID-19 lockdowns Habib saw an opportunity to go into business. He was able to buy the tools, equipment and vehicle he needed cheaply as COVID stricken businesses liquidated their assets.

“I hope to grow my business and move forward so that my kids can have a better future. Here in Australia we have no fears about tomorrow. In my country you always have fears about what will happen in the future,” Habib said.

“This is a good place for my family. Things will be better for them when they grow up,” he said.