From refugee to park ranger

A young refugee has recently been appointed as a full time Ranger with Parks Victoria, in what is believed to be an Australian first.

Hsar Thein is originally from Burma and now part of Werribee’s local Karen community. He arrived in Australia eight years ago at the age of 16, after growing up in a refugee camp on the Thailand Burma border.

Through a partnership program with AMES Australia and Brotherhood of St Laurence, which supports young refugees, Hsar started at Werribee Park four years ago as a horticultural Internship student.

A keen gardener and hard worker, he excelled in both his work and studies, as well as showing exceptional practical and leadership qualities. This led to Parks Victoria offering him a traineeship for the next three years.

After recently completing his traineeship, Hsar successfully applied for a ranger role.

“Getting a full time job as a ranger is fantastic – its a dream come true,” Hsar said.

“Working with nature – with plants and wild animals – is my passion and I’m very grateful for this opportunity,” Hsar said.

Hsar’s new role as ranger will focus on developing links between local communities and horticulture programs. He will work alongside park rangers from Werribee Park, Werribee River Park and Point Cook Coastal Park, connecting the local community with their parks through activities such as gardening and revegetation. 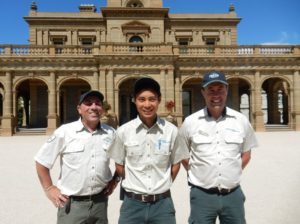 He will also be managing the park’s complex irrigation system.

“His journey from refugee to Park Ranger in such a short time is an outstanding achievement,” James said.

“For a young man to come to a new country, learn a new language, keep up his studies and become a park ranger is an amazing journey. We’re very proud of him, and he’s a real inspiration to other young refugees.”

“I’m so proud of him because Hsar stuck with it regardless of the challenges thrown at him.

“When he first came to us, English was a struggle for him. Now he can sit in a room full of people and contribute to discussions. Hsar has proved himself along the way,” James said.

Hsar’s mentor Senior Ranger Adam Smith said it had been a pleasure to watch him develop.

“Over the past four years, I’ve seen Hsar grow in to a leader,” Adam said.

“He is impressive and he obviously loves horticulture which means he will continue to learn for the rest of his life,” Adam said. 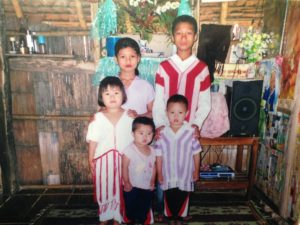 Hsar was one of just 53 successful applicants for a ranger position out of hundreds of applicants from across Victoria.

Hsar’s initial appointment stemmed from the ‘Working Beyond the Boundaries’ project – a joint initiative of Parks Victoria and migrant and refugee settlement agency, AMES Australia – which began with the creation of a community garden at Werribee Park.

AMES Australia CEO Cath Scarth said Hsar’s story was a great example of the skills and resourcefulness refugees bring with them to Australia.

“Hsar is an amazing young man who has a passion for his work. It is very pleasing to see him fulfil his dream of becoming a park ranger,” Ms Scarth said.