Refugee pays a price for freedom

Iraqi refugee Alaa Rafo Alasguir was tortured by ISIS and lost the business and wealth he had built up with his own hands over 27 years to the brutal, fundamentalist militant group.

He also almost lost his wife Rana during almost half a decade of life under the bloody reign of ISIS.

Since arriving in Australia eight months ago, Alaa and his family have started to rebuild their lives.

“Our life in the last couple of years in Iraq was terrible. There was blood and killing it was not safe for my kids and my family,” he said. 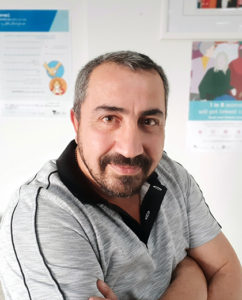 But because he and his family were Christians, the brutal militant group ISIS took away what had taken him almost three decades to build.

“ISIS hijacked our town and took everything from me and my family,” Alaa said, this week, speaking through an interpreter.

“They constantly demanded money from me and they tortured me. Twice the tore out all my fingernails,” he said.

Mosul, Iraq’s second city, fell to ISIS in June 2014, with its leader Abu Bakr al-Baghdadi proclaiming the creation of a ‘caliphate’ from its ancient and now destroyed Great Mosque of al-Nuri.

The insurgents hanged, burned, and crucified some Iraqi soldiers during their attack.

Many people fled the city but those who stayed behind, like Alaa and his family, were forced to endure severe social, religious and civil restrictions.

Very few children in the city attended school, unemployment rose dramatically and there were forced marriages, often of young girls, to ISIS fighters.

“I didn’t feel safe. There was no freedom, no respect for any human being,” Alaa said.

“I wanted to leave I would have paid anything to leave,” he said.

The last straw came when ISIS thugs came to his home and attacked Alaa. His wife intervened and she was thrown against a wall, seriously injuring her spine and leaving her partially paralysed.

“When I took my wife to the hospital they refused to treat her. They said this was an Islamic territory and there was no help for Christians,” Alaa said.

“This was not the Iraq or Mosul we were used to – the place where we grew up – where everyone was treated equally. This was the result of ISIS taking control of the city,” he said.

The family moved east to the relative safety of Kurdistan. Alaa approached the Iraqi government for compensation for what his family had lost but his case fell on deaf ears.

With few options and what little money they had left running out, in January 2017, the family moved to Jordan in a bid to start the process of finding a new home somewhere else.

“But life was difficult for us in Jordan. It was very expensive,” Alaa said.

And Rana’s physical health improved but her mental stated continued to deteriorate.

“There was no family for her and we were running out of money. We had our three kids with no schooling and future was very uncertain. Rana became very depressed,” Alaa said.

Through a friend, Alaa learned about Australia’s refugee program and began the process of applying for a humanitarian visa.

After two years and eight months living in limbo in Jordan, the family finally arrived in Australia.

But it was not plain sailing for the new arrivals

“I was very scared when I arrived in Australia. Our future seemed invisible and nothing was clear. I didn’t know how we were going to live in place that was so different. A different city, a different language and culture we didn’t understand. I was so scared,” Alaa said.

He says the family’s first month I Australia was terrifying.

But he said the support provided by the Australian government and refugee settlement agency AMES Australia eased the family’s fears.

“Being supported by Andrea, my case manager at AMES, changed everything,” Alaa said.

“And coming to Australia has meant so much for my wife’s health,” he said.

Rana has received care for her condition after being referred to the National Disability Insurance Scheme (NDIS). She is now walking more easily, interacting with people and shopping for herself.

“Rana has made a huge improvement through the NDIS and the health service here. She has access to a physio, she has a specialist and she has had MRIs for the first time,” Alaa said.

He said his family’s ordeal has made them a stronger unit.

“We have been through a lot but we have been able to achieve some of our goals,” Alaa said.

“Because of the support of AMES and the Australian government, I now feel my family has a future.

“And now I want to pay back the love this country has shown to us,” he said.

Alaa is volunteering to help newly arrived refugees from his homeland settle and navigate a new society as he has had to.

“I love this country and I want to help this nation be welcoming to everyone who comes here. I’m ready to help in any way I can,” he said.

“But whatever I do to help this country it will never be enough to pay back what it has done for me.”

Alaa said his first priority was to help Rana to get as healthy as she can be and become more independent.

“But I have a big dream to get a truck driver’s licence and to start working and then maybe to work as a mechanic again,” he said.

Alaa says coming to Australia has also had a dramatically positive effect on his three children.

“Before, they stayed home and didn’t feel safe in going out. Now, they are more confident and are happy to go out. Each has different skills and each is working on individual plans for their futures,” he said.

“My daughter wants to be a doctor. And even though she has not had much schooling because of the conflict in Iraq, she has set out on that path,” Alaa said.

He said that he feared for his father, mother and siblings still languishing in Kurdistan and would like to bring them here.

“To get visas, they need to go to Jordan but it is very risky and expensive. My parents are too old and my brothers and sisters do not have enough money,” he said.

“But still I will try to help them,” Alaa said.