Iraqi refugee Aram Shaabo is gearing up to join the fight against COVID-19 as a pharmacist working in Melbourne’s northern suburbs.

He has been working as a health professional for three years after fleeing his homeland.

The pharmacy where he works is preparing to become a vaccination centre as another outbreak of the virus sees Victoria lockdown once again.

“We are waiting for the final agreement and preparing to become pharmacist immunisers,” Aram said.

“We are standing by and ready to support the effort against COVID-19 and I’m proud to be a member of this community and of making a contribution,” he said.

Aram left behind a comfortable life and a burgeoning career as a pharmacist when he fled his home in northern Iraq as ISIS militia groups attacked. 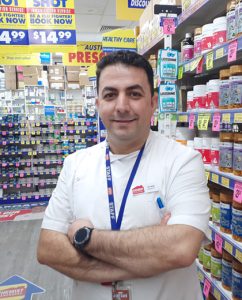 After years of living refugee camps and eking out a basic living as an exile in Lebanon, he and his wife were accepted for resettlement in Australia.

But for Aram, the pathway to resuming the career that is his passion was not easy. He faced a series of barriers in having his qualifications recognised, obtaining registration and ultimately finding an internship and a job.

In May 2014 ISIS forces cross the border between Syria and Iraq, west of Nineveh.  They captured Mosul on June 10.

Aram said most people in his city of Bakhdida, 32km southeast of Mosul, fled the city in the face of the assault and sought the protection of nearby Kurdish forces.

“We went to Erbil and my wife and I were married there. We were supposed to have a big wedding but we just got married in a simple ceremony at the Syrian Christian church in Erbil,” he said.

“After we were married, we moved to Lebanon and applied to the UNHCR for refugee status.

“We were waiting in Lebanon and we almost lost hope of getting to another country.

“There were lots of people waiting but we were very lucky and were picked by Australia for resettlement,” Aram said.

After being forced to leave Iraq, Aram struggled with his new situation.

“Psychologically, I was in shock. I had lost everything. Being a pharmacist in Iraq is a good job. I was well known and quite wealthy but I lost everything in the blink of an eye,” he said.

“I had been a clinical oncology pharmacist and I had my own pharmacy.  I saw people being killed and persecuted because of their religion,” Aram said.

Aram said he and his family had initially been under the protection of the Kurds for two months.

“Then ISIS were preparing to attack us. It was early in the morning of August 6 and we heard a lot of bombing and shelling and there were bullets flying everywhere,” he said.

“And the Kurdish forces started to withdraw but didn’t tell us. We had no weapons and even if we did, we couldn’t have stood against ISIS – they were bloodthirsty monsters.

“Two days before, in the hospital, my sister had given birth by caesarean and was still bleeding. There was a shortage of staff and equipment.

“Around midnight we were told we needed to flee – that ISIS was coming.

“I put my sister and her child in the car, even though the baby was unstable and underweight, and I got my mother, father and brother in the car. I had told my fiancée Sama to come in the early morning and then we left.

“We headed for the Kurdistan border but I realised that there were thousands of cars all doing the same. We had to walk. My brother and I carried our sister for an hour and half and we were lucky to make it to Erbil,” Aram said.

One and half million people entered the capital of Kurdistan in a couple of days, increasing the city’s population 150 per cent.

Aram’s family stayed in the largely Christian town of Ankawa, just outside Erbil.

“We stayed in a public park for the first few days, sleeping under the stars. Local charities provided us with mattresses and blankets and we had to buy food. But we ran out of money in a few days,” he said.

“When we fled, we had left everything behind. We couldn’t even get cash or clothes from out apartment. We lost all our belongings and memories.

“Eventually, local charities, the UN and the US and Iraqi governments provided us with basic needs.

“After a time, I moved to Zakho, near the border with Turkey but Sama stayed in Erbil. We were apart for more than two months.

“After that we realised we needed to be together so we decided to get married. We couldn’t do what we had planned. We were supposed to have a big wedding but we just got married in a simple ceremony at the Syrian Christian church in Erbil.

“My wife didn’t have a passport and as soon as she got one, we left. In Iraq, we had been through and seen a lot of bad things. We had seen people being killed and persecuted because of their religion.

“We didn’t want our children to go through the same things.

“A Christians, we had been persecuted but we had been able to handle it. But, even before the conflict with ISIS, we could see things were getting worse.

“We were wary but enjoying our lives because we were living in a small Christian community. But the conflict made us decide to leave and start a new life. So we left for Lebanon as a first step.

“I sold my car for half of what it was worth to get some money together. I needed money to live in Lebanon because it is very expensive,” Aram said.

With their money running out Aram and Sama considered returning to Iraq.

“It was risky but we felt we had no choice because we had little money left,” he said.

”But before we left we met a Lebanese priest who promised to help us. He introduced to a very rich person who gave me a job as a concierge in an apartment building he owned.

“I cleaned, did maintenance and assisted the residents. It was hard for me to do such work as I had trained as a professional pharmacist. But we were lucky to be alive and I had to work,” Aram said.

Arriving in Australia in 2017 filled Aram and Sama, a dentist, with a sense of optimism.

“We fell in love with the country from day one. It is a lovely country and the Australian people are very nice; they are very understanding and no one judges you. It’s a great multicultural country with huge opportunity,” Aram said.

But resuming his professional career here was not so simple

After being in the country for just a month, Aram applied for assessment and registration from the Australian Pharmacy Council (APC).

But obtaining documents from Iraq to support his application proved difficult because the University of Mosul, which he had attended, had been burned to the ground by ISIS.

However, after an initial assessment, Aram studied for and sat the Knowledge Assessment of Pharmaceutical Science (KAPS) exam. He then passed the required English exam after three attempts.

“But there is no system like this in Iraq. You need to go in person to Baghdad to get these documents and that was impossible for me,” Aram said.

He petitioned AHPRA about his particular difficulties in obtaining documents and Aram waited four months for a referral from the APC. And all of this was going on as Aram and Sama welcomed their first child into the world.

In the meantime Aram enrolled in the Career pathway Pilot with migrant and refugee settlement agency AMES Australia which supports refugee professionals to resume their careers in Australia.

“The CPP helped me a lot in understanding the industry here and working on my CV,” Aram said.

After two years in Australia, Aram finally got approval to work under supervision. But actually finding a job became yet another hurdle.

“At one point I went from pharmacy to pharmacy looking for work across Melbourne’s northern and western suburbs,” he said.

“Eventually I found a position as an intern at Chemist Warehouse in Airport West.”

Aram then had to complete almost 2000 hours of work as an intern as well as passing two more exams. He did this, and also completed a Graduate Certificate course at Melbourne University, and now has general registration as a pharmacist.

Aram is working as a pharmacist with Chemist Warehouse. He says that as a health professional he is keen to help in fight against the COVID-19 pandemic.

“We are ready, we have the skills and we can contribute,” he said.

Aram says his journey to resuming his career in Australia has been difficult.

“Working eight hours and having to do assessments and preparation for exams was not easy. Working in the pharmacy system here is different to Iraq so it took a couple of weeks to get used to it and adapt.

“But I am happy to be able to work again and I would love to work in research or in a medical role.

“I stepped off the plane with my best foot forward literally. We realised it wouldn’t be easy but we were determined to achieve our goals and overcome the difficulties we faced,” Aram said.

Since arriving in Australia Aram and Sama have had two children, a three-year-old daughter and a one-year-old son. The family have applied for citizenship.