Afghan refugee Mirwais Janbaz has voted only once in his life and he says Australians should not take for granted the privilege of living in a working democracy.

Mirwais, who lived in exile in Pakistan for most of his life, voted in the 2004 Afghan elections amid hopes for a new era of democracy and prosperity after the defeat of the Taliban in his homeland.

“I was living in Pakistan and when Hamid Karzai stood for the presidency for the first time. All of the Afghan refugees in Pakistan were allowed to vote and we all went to the polling booths full of hope for a better future,” Mirwais said.

“When you have never voted before and when your country has always been controlled by warlords or tyrants who were the puppets of foreign governments, it is an amazing experience,” he said.

“It was a happy moment. We really thought this was a new beginning. And Karzai gave us hope that things would improve and we might even be able to go home one day,” Mirwais said.

“I even got a job with the International Organisation for Migration (IOM) which was running the election in Pakistan. I was at one of the polling booths for ten days, helping other refugees to register their votes,” he said.

But Mirwais says that hopes for democracy and positive change in Afghanistan were never realised.

“Our expectations never came to be. We have seen the warlords come back to dominate politics in Afghanistan and corruption has returned,” he said.

Despite the revolving door of political leadership in Australia recently, Mirwais says we have a lot to be grateful for.

“The political situation here is very different to Afghanistan or Pakistan,” he said.

“In Australia politicians are under constant scrutiny by the media and by their opponents and there are standards of behaviour that don’t exist in my country,” Mirwais said.

He said that in Afghanistan gaining political position relied on “guns and money”.

“In Afghanistan, politicians have lots of bodyguards, cars and lots of power – but not much accountability. It is very difficult for ordinary people to meet ministers or political leaders,” Mirwais said.

He said he thought that Australians did not appreciate enough the democratic system they had.

“I know people in Australia complain about politicians and the system here but I think people should realise that democracy is a fragile thing and needs to be protected.

“In my country we have never had democracy or even the idea that ordinary people can become leaders,” Mirwais said.

“I think Australians should appreciate more what they have and cherish it,” he said.

Mirwais’ earliest memories are of fighting raging between rival mujahideen groups for control of the Afghan capital of Kabul in the wake of the power vacuum created by the Russian withdrawal.

His family was forced to flee their home after the Taliban took control of the city.

When a Taliban commander arrived at their house one day wanting to take one of Mirwais’ siblings away and force them into the service of the regime, his father decided it was time to flee. 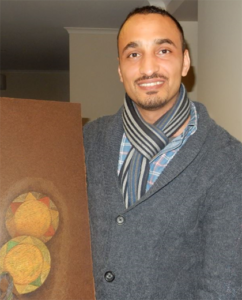 “That evening my father took us to the house of one of his friends and the next day, early in the morning, we left for Pakistan,” Mirwais said.

Mirwais and his family spent 20 years living in limbo in Pakistan not knowing what the future held or whether they would be forced to return to their war-torn homeland.

To make a living, Mirwais – an accomplished artist – took painting and drawing commissions from people, including from foreign embassy staff in Islamabad.

As a speaker of six languages, he also worked on call as an interpreter for the IOM.

Eventually, Mirwais and his family were granted refugee visas by the Australian Government.

They arrived in Melbourne in April 2018.

Mirwais says that he one day hopes to vote in an Australian election.

“It is my dream to one day become an Australian citizen and to take part in the political process,” he said.

“I feel welcome and I already feel like I belong here, but having the right to vote – that would really be something,” Mirwais said.