Refugee volunteers are helping out at a new community initiative in Melbourne’s north is supporting vulnerable people to get through the financial difficulties brought by the COVID-19 crisis.

Syrian refugees Yousef Alhawat, Fadi Shedid and Issa Alshadaydah are among refugees who are volunteering to support the Whittlesea Food Collective (WFC), a distribution centre not just for non-perishable goods but also for fresh food and vegetables.

The WFC was originally conceived as a one-stop shop where disadvantaged people in the local community could come for provisions, but the COVID-19 crisis has meant that food and other necessities are being delivered to asylum seekers, refugees, the elderly as well as ordinary Australians in the community who are struggling to make ends meet. 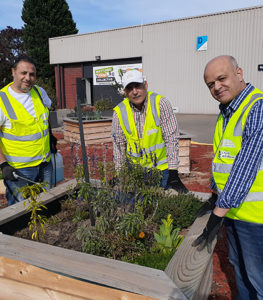 The three Syrians, clients of refugee and settlement agency AMES Australia, have struggled to find work in their professions and what work they have gained has been halted by the COVID-19 crisis. They are helping out in WFC’s warehouse and community garden.

Yousef is an accountant and farmer who arrived in Australia from in 2017.

“I started helping out with the Whittlesea Food Collective from scratch, because I love gardening and want to give back to the community,” Yousef said.

Fadi is a civil engineer from Syria who arrived Australia in 2016 with his family.

“I could not work immediately as an engineer so I decided to improve my English through attending English classes and doing some voluntary work,” Fadi said.

Previously, he volunteered at Helping Hands and is now helping out at WFC.

“Volunteering which helping me better communicate in English and meet people from different cultures as well as helping our community,” Fadi said.

“I wanted to give back to the community so I decided to be a volunteer. I am also a driving instructor at Whittlesea Community Centre and I’m helping out with the gardening at WFC and volunteer tutor at Melbourne Polytechnic,” Issa said.

WFC Project Officer Norma Medawar, herself a refugee from Syria, says that as well as supporting around a hundred families a week with food and necessities, the program is also providing social and emotional support.

“There is a lot of anxiety especially among refugee communities who have come from war zones. They are feeling isolated and not properly connected to the broader community. Our community groups have had to stop,” Ms Medawar said.

“But we have been trying to resume them online using technology. Just last week we held a women’s group remotely with 11 women. We talked about health issues, about COVID-19 and how people are feeling about it,” she said.

“Another issue is that people who have started work after struggling to find a job have now lost them and are back to square one,” Ms Medawar said.

WFC Coordinator Oreste Pompetti says the organisation’s long term vision is to establish an urban farm to address the issue of food insecurity.

“We are still working on the model with our supporting partners Melbourne Polytechnic, City of Whittlesea and Yarra Valley Water,” Mr Pompetti said.

“We’re a grass roots organisation with a vision to create a hub that is a place full of food and opportunity,” he said.

“We want to give experience and skills and the ability to learn and practice language in a real context with the possibility they could go on to gain employment.

“Until the COVID-19 virus came along we were gearing up to be a place where people could come and get what they need.

“But since the restrictions were put in place, the public can’t visit us so we are delivering food through our partners like ‘Fruit to Work’.

“We’ve established a call centre and now were servicing up to a hundred families a week,” Mr Pompetti said.

Initial funding for WFC came from the City of Whittlesea and the organisation also receives food from Food Bank and community donations.