Refugees’ epic journeys to freedom across the ‘roof of the world’

Tibetan refugees Palden and Tashi Tensing made perilous month-long treks over the highest mountains in the world to find new lives in peace and safety.

On their separate journeys, they dodged trigger-happy Chinese soldiers, survived raging torrents and nights lost in dense forests; and they walked for days blinded by blizzards, half frozen by snowdrifts.

Ultimately, they found sanctuary from the invaders who had enslaved their country – and they found each other.

Palden says that for him life in Tibet became more and more untenable as the Chinese Communist Party, which annexed his country in 1949, increased its control on daily life and effectively banned Buddhism and the Tibetan language. 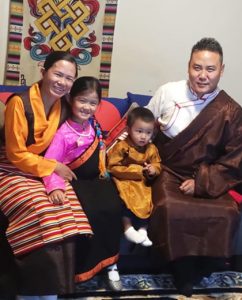 Thousands of Tibetans have jailed for having a photo of Tibet’s spiritual leader His Holiness the Dalai Lama and for teaching Buddhist beliefs.

Tibetans could not access higher education or well paid jobs, he says.

“It was very difficult in Tibet. The Chinese discriminated against Tibetans and considered us barbarians,” Palden said.

“I was not happy with this. I could not talk freely about politics or the Tibetan nation. There were no educational opportunities and if you didn’t learn Chinese, you had no career,” he said.

So, in 1998, aged 18, he left Tibet and followed the pathway of the Dalai Lama and 80,000 other Tibetans who fled Chinese oppression and trekked over the Himalayas in 1959 to found a Tibetan community and government-in-exile at Dharamshala, in India.

“I walked 29 days over the Himalayas into Nepal. It was dangerous because the Chinese soldiers would have shot us if that had seen us,” Palden said.

“We were in a group of 12 and we travelled in Autumn so it was very cold. We had to sleep out in the open so we took with us warm clothes,” he said.

To eat on the strenuous journey, the group took along balls of Tsamba, a Himalayan staple made of glutinous barley flour meal mixed with the salty Tibetan butter tea.

There was a tense moment when the escapees approached the Tibet-Nepal border at 1am in the morning.

“We saw the Chinese trucks blocking the road as we approached the border, and their tents were everywhere. I saw a soldier on the truck and carrying a gun lifted to his shoulder.

“We got off the road and got into a river that ran beside the road,” Palden said.

“We crept past the Chinese and got away. If the soldiers had seen us, they would have shot us,” he said.

Tashi’s journey, six years earlier when she was aged just 5, was just as perilous.

She set out with her brother, two monks, a women and a friend as a guide. Her father had passed away and her mother sent her children to India for a better life.

“The journey was very difficult. We walked at night because it was safer,” Tashi said.

“There was lots of snow and as we crossed over the top of the Himalayan range there was a blizzard and we couldn’t see the road,” she said.

“We waited two hours for the weather to clear but we lost the road because our eyes were blinded by the snow.

“Eventually, the storm stopped and we found the way,” Tashi said.

As way of giving thanks, Tashi and her companions placed stones on the road as sign to others following behind – a tradition now for Tibetans fleeing to India.

“We walked separated in the dark for safety and one night I lost the road and become lost in a forest all night,” she said.

“My brother and our guide came to look for me and eventually found me. It was a scary time,” Tashi said.

Her travelling companions separated into small groups to cross the border into Nepal but the two monks were arrested by police.

“They were sent back to the Chinese police and were beaten and put in jail,” Tashi said.

She and her remaining group made their way to the Tibetan Government’s reception centre in Kathmandu and were processed by the UNHCR. They then caught a bus to Dharamshala.

Both Tashi and Palden worked for the Tibetan government in India. They met at a Tibetan college in 2002 and married in India.

Palden says the couple were happy in India at first. He worked designing curricula for Tibetan language studies and Tashi for the Tibetan government’s health service.

“We were free and the Indian people were very kind to Tibetans but financially it was very difficult and documentation became more of a problem,” he said.

In 2018, Palden went to the US to speak at a conference on the Tibetan language.

On his return, he was interviewed by Indian authorities because he had no passport.

“I was not allowed enter India and the Indian immigration authorities looked into my case for three hours because I didn’t have a passport. Tibetans cannot get passports in India. We have permits that need to be renewed each year.” Palden said.

Documentation continued to be an issue for Palden in India when he was repeatedly accused by police of being a “foreigner” amid growing Hindu nationalism across the country.

And both Palden and Tashi began to harbour fears for their young daughter Tensing Dickey as gender abuse and rape became more prevalent.

Their application to come to Australia as refugees was granted and they arrived in 2019 just before the COVID-19 pandemic struck.

Locked down in a small flat with two young children in Melbourne’s inner west, the family turned to their spiritual leader for advice and solace.

The Dalai Lama has been talking remotely, using technology, to thousands of Tibetans across the globe.

“His holiness has been talking about positive emotions, positive thinking to help people get through the pandemic to give people peace of mind in a difficult time,” Palden said.

“We have also been teaching our daughter Tibetan during this time,” he said.

Palden and Tashi are now building a new life in Melbourne with support from migrant and refugee settlement agency AMES Australia through the Humanitarian Settlement Program.

The couple and their two children are on now pathways to establishing themselves. Through the HSP they have been provided with services including essential registrations, housing, orientation and links to health and education services.

And the family has shown enthusiasm to work on their settlement journey and a passion to succeed.

“They have been working progressively and intensively on all the key settlement elements and they’ve shown the ability to learn quickly. They are also very persistent and are determined to achieve their settlement objectives,” said their Case Manager Sui Len Bawi Hrin.

Having improved their English, the couple have identified training opportunities and enrolled in courses.

Tashi is currently doing a Certificate III in Child Care and hopes to eventually find work.

Palden has also begun a Certificate III in Health Services Assistance (Operating Theatre Technician). He hopes to take on further training and improve his employability.

The couple say they are happy and grateful to be in Australia.

“We love life in Australia and the opportunities that our children have here. We are determined to find work and support ourselves and enjoy all that Australia has to offer,” Tashi said.