Despite surviving the worst genocide in modern history, two decades in a refugee camp and a precarious education that saw him walk 24 kilometres a day to attend school, the Congolese refugee considers himself blessed.

“I would consider myself, a very fortunate person. When I tell people my story, they often think that I am the most unfortunate child of Congo, but I am not,” Gomis said.

Gomis was just three months old when his family fled their home in the Congo.

As ethnic Tutsi’s they had become the target of militias from the rival Hutu tribe in the aftermath of the civil war and genocide in neighbouring Rwanda.

Gomis’ family fled their home and ended up in a refugee camp in Rwanda where they spent the next 22 years. 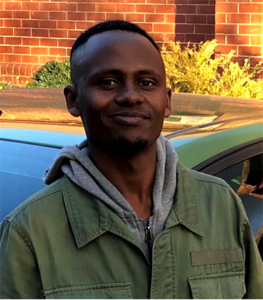 During the Rwandan genocide of 1994, members of the Hutu ethnic majority in the east-central African nation of Rwanda murdered as many as 800,000 people, mostly of the Tutsi minority.

Begun by Hutu nationalists in the capital of Kigali, the genocide spread throughout the country with shocking speed and brutality.

Ordinary people were incited to take up arms against their neighbours and by the time the Tutsi-led Rwandese Patriotic Front gained control of the country through a military offensive in early July, hundreds of thousands of Rwandans were dead.

Gomis said that many of the Hutus fled to the Congo after the conflict in Rwanda.

“They came and started to attack the rival tribes. They started killing us and took our property and they burned out homes,” he said

“Many of us fled to Rwanda, Uganda and Burundi,” Gomis said.

“Growing up in the camp, we were very young and we didn’t know anything else,” he said.

“We played together as children but sometimes we were unhappy because there was not much food and no medicine. Often we couldn’t afford our basic needs.

“But otherwise it was kind of normal; we went to school outdoors under the trees,” Gomis said.

“The Gihembe refugee camp became my home together with hundreds of refuge children. Life was good as I knew it and we were not really aware of the conflict as long as we were able to play and have some meals.

“School was at the camp under the trees and if we were fortunate enough, we were in a classroom with 80 other students in one class.

“I recall, one hot summer day, some of my classmates had to stop school as the food ration was getting smaller and smaller and trying to learn in a hot and crowded classroom with very few resources and a hungry stomach was not easy.

To attend secondary school Gomis had to walk a 24 kilometre round trip.

“As I reached secondary school, the conflict between the two tribes became even worse and with the advent of mass media I saw the tragedy that surrounded my new-found country,” Gomis said.

“I was lucky that the camp had provided us a safe haven, despite its dire condition and we teenagers made the most of our experiences in the camp. Secondary school was no longer offered at the camp and we had to walk twelve kilometres each way, each day to get to school.

“I would wake at 4am to get to school by 6am for pre-school study. The school day would begin at 8am and end at 2.30pm.

“We would walk home by 4pm and sometimes there would be no food when we got there,” he said.

In 2014 Gomis graduated from high school and was one of just two students in a camp of 17,000 people who won scholarships to attend university.

“Going to university would have been impossible for me until he UNHCR in partnership with the Albert Einstein German Academic Refugee Initiative offered me a university scholarship with the prestigious Mt Kenya University in Kigali. I was again a very lucky boy!

“Throughout my university studies, I made it my mission to use social media to bring hope, friendship and love in a country that was torn by civil war and tribal factions.

“I truly believe that change will happen if young people are enabled to see hope and trust in the future and to reclaim their lives back. I’m sure my classmates and I have made a difference, however small, in how young Rwandans see themselves as opposed to how their parents saw each other during the genocide,” Gomis said.

While it was his dream to attend university in the capital Kigali, his problems weren’t over.

“Sometimes we were discriminated against in the city. We were told ‘you are just refugees’,” Gomis said.

“It was horrible, as if some people didn’t consider us as human,” he said.

“But we had to keep pushing. My only choice was to work hard, study hard and maybe tomorrow will be better.

“We were Tutsis but from another country, not Rwanda. So we had to work very hard and be very careful.

“At uni, my closest friends were other refugees; they were the only ones who knew I was a refugee. We all we tried to hide the fact because the locals discriminated against us.

In 2018, Gomis completed a Bachelor Degree in Mass Media and Communication and started working with UNHCR as a freelance humanitarian photographer.

Shortly after that, his family’s application for humanitarian visa was granted and they moved to Adelaide where they are starting to build a new life in Australia.

“Now I’m studying a Master’s Degree in Screen and Media Production at Flinders University and working as a photographer part time,” Gomis said.

“I consider myself to be the luckiest boy in the world because of the many opportunities that were given to me and for the many people who inspired me to have hope and to believe in the goodness of humanity in the midst of anger, hunger and pain,” he said.

While life in Australia has its challenges, Gomis is optimistic about the future. He has worked with UNHCR in Australia as well in fundraising

“There are great opportunities in this country and I want to be a visual artist in filmmaking and photography.

“I want to explain the real world to people through my images and tell the stories of refugees and humanity across all communities.

And I want to working with humanitarian agencies to help those in need; to give back and let other people benefit from the help I got when I was in their situation.

“Even in Australia, I will continue to inspire my friends who are left in Rwanda to never lose hope and to believe that tomorrow can be better,” Gomis said.