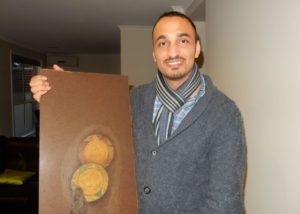 As a seven-year-old he was sent by his family to buy bread at a shop just 100 metres from his home.

“I was just ten metres from the bread shop when suddenly it was hit by a rocket. The shop was destroyed and everyone inside was killed,” Mirwais said.

“I jumped into a small stream that ran past the bakery and I thought I would die. After a time, I looked up and there was just blood and smoke everywhere,” he said.

“I ran home and my uncle had run over to the shop to find me. When I got home my family didn’t recognise me because my clothes and my face were so dirty.

“When my uncle got home, he said everyone in the bakery had been killed. It was a very bad time,” Mirwais said.

This seminal moment in Mirwais’ life came in the early 1990s as fighting raged between rival mujahideen groups for control of the Afghan capital of Kabul in the wake of the power vacuum created by the Russian withdrawal.

Over the course of the year, hundreds of rockets hit Kabul and thousands, mostly civilians, were killed and around half a million people fled the city.

In 1993, the rival militia factions continued their fight over Kabul and several cease-fires and peace accords failed.

By 1995 the fighting now across all of Afghanistan had been distilled into conflict between four factions: Burhanuddin Rabbani’s ‘interim government’; the Taliban; the forces of former Afghan communist general Abdul Rashid Dostum, and; the anti-Soviet Hizb-e Wahdat group.

The byzantine web of intrigue and violence was the backdrop to Mirwais’ early childhood.

Now rebuilding his life from his new home in Melbourne’s south-east, Mirwais has told of his strife-wracked life journey.

“I was a child living in Kabul during the civil war and I remember friends and neighbours being killed,” he said.

“Also, my uncle, my father’s brother was killed in the war. He was a teacher and he ran real estate business. A rocket came and hit his shop and he was injured. He lost part of both his legs and he died six months later,” Mirwais said.

“During the civil war we were stuck inside Kabul unable to leave. There was fighting everywhere and there was no way to get out.

“Rockets and bombs were being fired all the time and I lost friends and neighbours whose homes were hit. As kids we would sometimes count the numbers of rockets we could hear,” he said.

When the Taliban eventually seized control of Kabul, Mirwais’ family thought that, despite the regime’s repressive policies, there at least would be peace.

But when the Taliban arrived one day wanting to take one of Mirwais’ siblings away and force them into the service of the regime, his father decided it was time to flee.

“That evening my father took us to the house of one of his friends and the next day, early in the morning, we left for Pakistan,” Mirwais said.

The family crossed into Pakistan at the Torkham Border, a busy crossing spot in the Nangarhar province.

“As we crossed the border some soldiers asked for money and they beat me when I didn’t have any,” Mirwais said.

They settled in Islamabad where Mirwais’ aunt already lived and Mirwais attended refugee schools funded by the UN where he excelled in drawing painting and calligraphy.

But going on to further study was difficult as Afghan refugees in Pakistan are not afforded official status or ID documents.

“After high school, it took me two years to get the documents I needed to get to university to study journalism and mass communications,” Mirwais said.

“Successive governments is Pakistan have made their own laws about refugees so it is very difficult to know where you stand,” he said.

Mirwais and his family spent 20 years living in limbo in Pakistan not knowing what the future held or whether they would be forced to return to their war-torn homeland.

To make a living, Mirwais took painting and drawing commissions from people, including embassy staff, who liked his artworks.

He also worked on call as an interpreter for the UN’s migration agency, the IOM, as a speaker of six languages.

But it was in Islamabad that tragedy struck the family. In 2001 his older brother Waleed was electrocuted because of poor wiring in the apartment they rented.

Waleed was just 22 years old and the tragic incident caused, and is still causing, a great deal grief for Mirwais and his family, who say the incident was never investigated by the authorities.

“Because of this, I knew a lot about Australia before I came here. I even met an Afghan lady on the train who told me that we had met in Pakistan when I had done an orientation session,” Mirwais said.

Mirwais took to the sport and won a scholarship for a study tour to Brazil. He has since become an instructor.

“I love the philosophy of Capoeira. It is a fighting sport but really it is about community, humanity, self-respect and confidence,” he said.

In Pakistan he taught the sport to young refugees to give them confidence and an outlet to their fears and frustrations.

Mirwais arrived in Melbourne in April, six months after his parents and brother.

“Arriving in Australia was a life changing moment for me,” he said.

“In Pakistan I had no identity. We were scared of the police and they would take money from us with guns. We weren’t allowed to work or open a bank account,” Mirwais said.

“The police pick on refugees and ask for money. People who can’t pay or don’t know anyone are put in jail.

“When I arrived in Melbourne, there as a woman in uniform (border force official) who welcomed me to Australia in a very kind way. That was the best moment,” he said.

Mirwais says he is now keen to find a job.

“In the short term, I want to find work and I will learn some new skills if I need to. I don’t want to take money from the government. I am very grateful to the Australian government and the Australian people and I want to pay them back for giving me a safe place to live,” he said.

“But I also plan to continue my studies and with my art and with Capoeira. That is my future plan.”