Newly arrived refugees and migrants are more worried and feel more vulnerable to the health and economic impacts of the COVID-19 virus crisis than ordinary Australians, according to a new snapshot poll.

New arrivals are also less well informed than most Australians but are more compliant with social distancing and hygiene restrictions, the poll found.

Commissioned by migrant and refugee settlement agency AMES Australia, the poll asked 130 respondents from 27 countries about their levels of anxiety in the face of the COVID-19 crisis.

Seventy-seven per cent of respondents said they felt ‘high’ or ‘moderately high’ levels of anxiety about the virus. This compares with just 57 per cent of people in the broader Australian community who told a recent YouGov survey they were feeling the impact of the COVID-19 crisis.

Sixty-eight per-cent of refugees and migrants said they feared losing their job as a result of the fallout from the pandemic and 66 per cent said they feared not being able to pay rent or put food on the table. This compares with 49 per cent who fear losing their job and 48 per cent who fear not being able to pay rent or feed their family in the broader community.

Meanwhile, 89 per cent of refugees and migrant polled said they were not confident they could protect themselves from becoming infected with the virus – compared with less than 50 per cent in the broader community – but most (72 per cent) were confident that things and would return to normal. 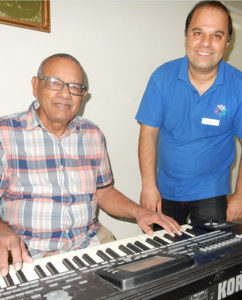 Almost a third (29 per cent) of respondents said they did not feel properly informed about the COVID-19 pandemic while 71 per cent felt they were informed adequately.

Sixty-seven per cent they were receiving and understanding government and health authority messaging on the pandemic, while 33 per cent were not.

Most (48 per cent) cited language as the major barrier to receiving information while 31 per cent said they did not know where to look.

Respondents, overwhelmingly, said they were complying with health advice to stop the pandemic with 87 per cent staying at home, 93 per cent social distancing and 94 per cent practising hygiene measures. This compares with Australian Bureau of Statistics’ figures showing just 88 per of people were rigidly social distancing.

Overall, newly arrived migrants and refugees are trusting of the government’s response to the crisis and are optimistic about the future.

Eighty-one per cent said they trusted the government and health authorities to handle the crisis, while 11 per cent did not and 8 per cent were unsure.

Interestingly, just 12 per cent of respondents said they had bought large amounts of food and other supplies at the beginning of the crisis.

AMES Australia CEO Cath Scarth said the poll showed that migrants and refugees were keen to do the right thing by society in the face of serious crisis but also they were among the most vulnerable to its negative impacts.

“It’s clear that people who are newly arrived to this country want to make a contribution by complying with the social distancing and health advice. Indeed, many are working on the frontlines of the fight against the crisis in aged care facilities and hospitals,” Ms Scarth said.

“But it is also clear from the data in the poll that they are among the people who are most exposed to the negative health and financial impacts the pandemic is having,” she said.

“But we are also seeing optimism in the data, which is not surprising to us. In our work with refugees and migrants we are always seeing the resilient and positive natures of people who are setting out to build new lives for themselves,” Ms Scarth said.

Iranian refugee Hadi Mohammadi is working on the front lines of the fight against COVID-19 as a   music therapist in a nursing home in Melbourne’s north.

Mr Mohammadi says he is worried about the health impacts of the virus on his family and his children’s education.

“It is a very worrying time for everyone. We don’t know what is going to happen,” Mr Mohammadi said.

“But if we stick together and all do what the government is asking, things will get better. I feel lucky to be in Australia because many people are dying and the situation is very bad,” he said.