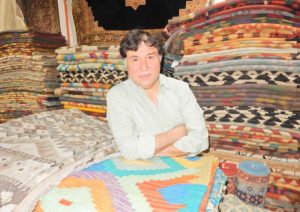 Najaf Mazari says that there are very few Afghans who can remember time when there was not fighting.

The Afghan refugee and author of the best-selling memoir ‘The Rugmaker of Mazar-e-Sharif came to Australia in an asylum seeker boat in 2001 and has rebuilt his life in Melbourne.

He fled the conflict between the Taliban, dominated by a Pashtun majority, and the Hazaras, a long oppressed Shiite minority. The war in his homeland provided the soundtrack and the backdrop of the religious and ethnic conflict that dominated most of his early life.

It claimed the lives of his two brothers, almost made his family destitute and finally forced him to give up everything he held dear.

“I personally believe the war in Afghanistan is the result of proxy forces from outside trying to have influence… and it’s still going on. But when I was in Afghanistan I didn’t know that,” Najaf said.

Najaf says the prospects for peace in Afghanistan are not good.

“Now you have players in the west still involved but there are also forces like Pakistan and Iran,” he said.

“Ten years is nothing in Afghanistan, even a hundred years is not a long time. There are not many Afghanis who can remember a time where there was no fighting.”

Between 1995 and 2000 the Taliban ruled Afghanistan with an iron fist. Claiming to be restoring peace and enforcing Sharia law, the Taliban banned everything from music to clean-shaven men. They closed schools, prevented girls from gaining an education and singled out the Hazaras for persecution.

In his book Najaf tells how the Taliban raided his home city of Mazar-e-Sharif shooting young Hazara men on the spot.

His brother and mentor Gorg Ali was killed in the fighting and his death saw the family’s fortunes take a turn for the worse.

The Hazaras were expelled from Mazar el Sharif but Najaf refused to leave and was forced into hiding. It was his brother Gorg Ali who encouraged him to learn the skill of weaving rugs.

“I learned waving as a child. In Afghanistan there are two types of education. If you can afford it there is school, but it you can’t there is learning a skill,” Najaf said.

“My brother taught me and he kept me away from the fighting and the politics. He was the one who pushed me into learning the skill of weaving,” he said.

“I have often thought of putting on my business card ‘we love rugs not war’.

“A rug means you can enjoy the beauty of a house. I think of this when I see people destroying houses in my country. And if you have a skill you can use it anywhere,” Najaf said.

During the time of the Taliban Najaf was beaten, flogged and threatened with being burned alive. He also once hid in cupboard for 12 days evading capture – and worse – at the hands the Taliban.

He says that rather than become embittered, his faith in the goodness of God was strengthened during his ordeals.

Once, when his leg was injured in a rocket attack and he was bedridden for weeks, he says he was forced to think about his life and its challenges.

“I attempted to profit from this period of being bedridden by thinking of such matters of importance. I knew that I had to be strong in my body and my mind for whatever is to happen,” Najaf said.

And he says that work of weaving carpets gave him time to think about the prospect of a better life; a life filled with hope and prosperity.

”It was this double weaving in my mind and on the loom, that kept my spirits high, when the Mujahideen chased me and the communists chased me and the war went on and on and the jets roared overhead,” Najaf said.

He says he simply refused to give in to the Taliban. And because of his resilience, it was decided by his family that he should be the one to make a perilous journey to safety.

“My family said that leaving Afghanistan, even illegally, was my best chance of survival,” Najaf said.

“The trip was risky but life in Afghanistan was a risk. Things were already scary,” he said.

“Nothing is easy. It is very painful to have to leave your country and to leave you family,” Najaf said.

After a perilous journey through Pakistan, Indonesia and by boat to Australia, Najaf ended up in immigration detention.

He says that many of his follow asylum seekers at the Woomera Detention Centre lived in constant fear of being deported back to the countries they had.

“The most difficult thing about detention is not knowing your future. Waiting is difficult and people get depressed,” Najaf said.

After being released from detention, Najaf became an Australian citizen and as joined by his wife and daughter.

He has started an Afghan rug retail business in Melbourne, he is on the public speaking circuit and he has written two books; ‘The Rugmaker of Mazar-e-Sharif’ and ‘The Honey Thief’.

The first of these is now the subject of a movie project to be directed by Anthony LaPaglia.

And the earnings from the book have funded an ambulance for his village.

“If I can save one life a year, I believe I have done my job,” Najaf said.

He says he is fortunate to have found a new life in Australia which has provided his family with a bright future.

But Najaf says not all newcomers to this country are given a fair go.

“Sometimes when people come to Australia, especially those who come by boat they have skills,” he said.

“But some employers won’t give them a chance. When I first arrived I went to carpet factory to look for a job and I saw they were using ‘finishing machine’ which evens out the length of the pile.

“It takes six months to master this machine and I had used the machine at home in Afghanistan. But the owner wouldn’t let me show him I could do the work because he was worried I would ruin his carpets – which is easy to do with this machine.

“But I convinced him to let me use it on a small piece of rug. When he saw me use the machine he offered me a permanent job.

”I think businesses and employers in Australia could benefit from using the skills refugees and newcomers bring with them,” Najaf said.

He says he in “blessed” to have a life in Australia.

“I run a small business which is tough, it’s not easy,” Najaf said.

“But coming to Australia has opened my eyes about the world. And when I am speaking publicly I try to tell people what is going on in Afghanistan,” he said.

“Australia is a fortunate country. It has been fortunate for me and it meant that I wrote two books. And through those I was able to get out a message of peace,’ Najaf said.

Najaf’s daughter 18-year-old Maria has followed in her father’s footsteps. She is studying textile design and interior decorating at RMIT.

“I didn’t push her into it. I told her ‘study what you love’ but she went ahead anyway,” he said.

Asked about what he has learned on his journey as a refugee, Najaf tells a story that he says sums up his attitude to life.

“To me justice and fairness are important. As a Hazara I understand what it is to be a minority, to be persecuted and to be targeted,” he says.

“When I was on the boat coming to Australia, I was cooking for 96 people.

“We only had a little rice and potato but I made sure the women and children were fed first. Then I made sure the minority people on the boat were fed and then I fed my own people. The Hazara men were served last.

“I think this was important. It was saying to people you are valued, you are part of this united group and we are together on this journey,” Najaf said.