Minutes after touching down at Melbourne’s Tullamarine Airport in November last year, four-year-old Absaar Ahmad was carefully transferred to a waiting ambulance and rushed to the city’s Royal Children’s Hospital.

The boy was suffering from holes and blocked arteries in his heart, a condition that had gradually worsened over the five years he and his family spent as refugees in Malaysia.

On arrival, Absaar was in a critical condition, malnourished, weak and turning blue. His parents Anwaar and Asifa feared the worst.

Absaar underwent emergency open heart surgery. His doctors said they were able to save him only because he was brought to the hospital in time.

The now five-year-old has recovered and is attending kinder; and his family are well settled in Melbourne’s northern suburbs.

“It was a frightening time for my family. My son was very sick. He was blue and not moving,” dad Anwaar said.

“But thanks to AMES and the Royal Children’s Hospital he is much better,” he said. 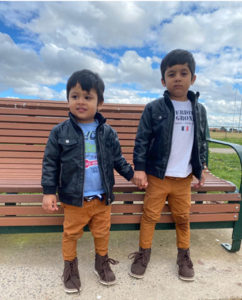 Absaar’s life was effectively saved by Australia’s sophisticated refugee settlement system and the hard-working and dedicated staff who run it.

The Ahmad family were due to be settled in Adelaide in November last year.

But timely detective work by staff at refugee and migrant settlement agency AMES Australia who, armed with details of Absaar’s condition, unearthed the fact that there were not adequate medical facilities in South Australia to treat him.

Thanks to the timely intervention of the AMES’ Humanitarian Settlement Program (HSP) staff in South Australia and in Melbourne, the family’s arrival in Australia was switched to Victoria, a move that effectively saved the boy’s life.

Key to the outcome was the intervention and pre-arrival work by the HSP team in Adelaide in consulting with medical specialists and hospitals; and the arrangement of emergency transport from Melbourne airport.

The family’s first days in Australia were challenging and overwhelming because of Absaar’s condition and his recovery from serious and complicated surgery. 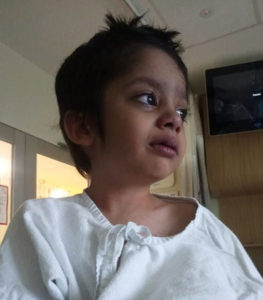 “The family was significantly socially isolated and were experiencing culture shock. But we were able help the family to overcome these barriers and get back to normality by providing them with a comprehensive intervention,” William said.

Currently, Absaar is doing well. He is healthy and attending kinder; and the family has settled well in the Broadmeadows area, in Melbourne’s north.

“My son is very well now. He has come back to normal and is attending kinder,” Anwaar said.

Anwaar and Asifa are grateful to AMES Australia staff, to RCH and to the Australian government and people.

“We now have a safe life in Australia and we have a healthy son. We are very thankful to AMES and the doctors and everyone who helped us at the Royal Children’s Hospital. And we are grateful to the Australian government for giving us a new home,” they said.

Before arriving in Australia, the Anwaar family had spent five difficult years as displaced persons in Malaysia, where they had fled from their home in Pakistan because of the persecution they suffered as members of the minority Ahmadiyya Muslim sect.

The Ahmadiyya sect of Islam has been subject to various forms of religious persecution and discrimination since the movement’s inception in 1889.

Ahmadis are considered non-Muslims and heretics by many mainstream Muslims; and they are routinely subjected to persecution and systematic, sometimes state-sanctioned, oppression.

Pakistan’s constitution deems Ahmadis to be non-Muslims and deprives them of religious rights. About 2.5 million Ahmadis live in Pakistan, the largest population in the world.

Hundreds of Ahmadis were killed in the 1953 Lahore riots and the 1974 Anti-Ahmadiyya riots. The May, 2010, attacks on Ahmadi mosques, infamously known as the ‘Lahore Massacre’, resulted in the murder of 84 Ahmadis in suicide attacks.

Once Absaar had stabilised post-surgery, Anwar and Asifa were determined to find employment as soon as possible.

Anwaar was provided with employment related orientation and training through the AMES HSP Program and he secured a job at a chocolate factory within few months of arrival.

Even though he was retrenched due to COVID-19 restrictions, Anwaar was re-engaged by the same employer and recently was promoted to an even better role which he hopes will become a permanent position soon.

The family feels they have fulfilled their aim of living together as a family and being financially independent with their employment and education outcomes.

While Anwaar is in full-time employment, Asifa is learning English and establishing social connections with other mothers from her community with the support of AMES Australia.

In Pakistan, Asifa was a leading women’s cricketer who played at the national level.

She is hoping to join a women’s cricket club in Melbourne as well as to gain employment once she has improved her English.

William says the Ahmad family has made great steps.

“The family has now fulfilled their wish of living together as a family and being financially independent with clear employment and education pathways,” he said.

“From a state of near hopelessness, social isolation and culture shock, the family have made significant progress. They are well linked to support services, they have established social connections, and they have strong employment and education pathways,” William said.

“It is so encouraging to see such remarkable changes in the life of newly arrived refugee families,” William said.

“Absaar’s story shows established settlement programs can support people to overcome all kinds of adversity – whether these are life-threatening health problems, employment issues or barriers in connecting to the wider community,” Ms Scarth said.

“Settlement programs help newly arrived people to feel that they belong in this country and help them to be able to contribute to Australian society,” she said.