Shot at, forced to flee but still smiling

A refugee family who were targeted by the Burmese military and spent two decades in a refugee camp are finally rebuilding their lives in Melbourne.

Karenni couple Bo Reh and Namon and their three children have settled in Werribee, in Melbourne’s west. Their children are in school and Bo Reh is, at last, receiving proper treatment for a knee wound he received when he was shot by Burmese soldiers.

“Because of the Burmese military we had to flee our place,” Bo Reh said.

“My parents’ generation suffered abuse and persecution and this has continued into my generation,” he said. 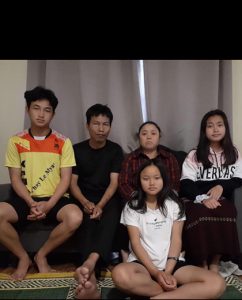 “They would come to our village and accuse people of crimes they did not commit. They would arrest us. I was arrested and held in prison for a month. After that we knew we had to flee.”

Bo Reh’s family spent about twenty days and nights trekking to the relative safety of a Thai refugee camp. Arriving in 1998, they spent 22 years in the camp before being resettled in Australia under the Humanitarian Settlement Program (HSP).

“We could not go by road because it was dangerous for us so we had to travel through the jungle and over the mountains because if the Burmese soldiers had found us, they would have shot us.

Bo Reh, now 51, and his family became some of 100,000-or so people from minority communities who fled Burma and found sanctuary in a string of refugee camps along the Thai-Burma border.

The Karenni are an ethnic minority from eastern Burma, where extensive mineral resources and hydro-electric power brought a large presence of Burmese military personnel. They are among several Burmese ethnic minorities who have been the subject of violence and persecution by the Burmese military.

But life in the camps was only marginally better with now work, little in the way of education and a limited food supply.

“Life was very difficult with no chance to work. Food was very short and we were given exactly what we needed and not more.

It was on a food foraging trip that Bo Reh crossed the border back into Burma and was spotted by Burmese soldiers. He was chased and shot though the knee before his companions helped him escape.

Now in Australia, he is still receiving treatment for the injury and will shortly undergo surgery. Bo Reh has also applied for a disability pension.

But he says life in Australia is much better than Burma or the Thai camp. And although he is struggling with his own disability, he sees great opportunities for his three teenage children, who are all at school.

“We could not live in Burma under the feet of our oppressors and in the camp there was no future for my children,” Bo Reh said.

“In Australia we can sleep well without fear. We have enough to eat and we are safe. I am happy to be here because my children can have a future,” he said.

Bo Reh says he fears that the recent military coup Burma will see things worsen for people from minority groups still living in the country and will stymie people’s hopes of returning to their ancestral lands.

“The military are ruthless people. I am worried about what will happen. Many people have died and I’m afraid there will be many more,” he said.

“I hope the international community will put pressure on them to give up power and restore democracy to Burma.”

Bo Reh and Namon have a fourth adult child still living in the camp. They hope to bring him to Australia as things worsen in Burma.

They have been supported on their settlement journey by AMES Australia staff through the Humanitarian Settlement Program (HSP).

“They are quiet, resilient people who never complain about their lot in life,” Chez said.

“Reh and Namon have put their children first. They can see that their kids – the next generation – will have opportunities they never had and will be able to prosper and live in a safe environment,” she said.