Starting over – a refugee’s journey of self discovery 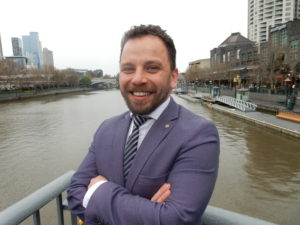 When a friend told Joseph Youhana his name was on a death list pinned to the wall of a mosque in his home town, he knew his life had changed forever.

The young Iraqi student’s idyllic life in the ancient and beautiful city of Mosul – in the country’s fertile north – was over and at the moment he became a refugee.

Everything he had known, loved and worked for was left behind as his family fled to save their lives.

After years of trying to find permanent refuge anywhere in the world, his family finally settled in Melbourne. Now Joseph works to help other refugees, who have arrived more recently, integrate into Australia’s social and economic life.

He says that as a former refugee himself, he has a double duty; to help other newly arrived people, and to contribute to the country that took him in.

“As children in Iraq we had good lives, we would play outside all day and we had good relationships with our neighbours and with all of the different groups in our society,” Joseph said.

“My father was in business – he owned shops, a mini mart and a framing business.

“Our family was active in our Christian church and in the wider community. We were very happy,” he said.

But when Joseph was just seven, the economic sanctions introduced by the US in response to Saddam Hussein’s invasion of Kuwait began to have an effect.

“It brought poverty. You could tell almost immediately. There were no imported goods for sale. We could no longer buy chocolate in the marketplace,” Joseph said.

“The sanctions meant Iraq couldn’t import anything from overseas. As a kid I remember I missed that stuff but we couldn’t do much about it,” he said.

“During the Iraq Kuwait war my Dad was called into the army. It was a scary time. I remember wondering if my dad was coming back. We had no mobile phones then so we got a call from him once a week on a landline.

“We feared for my father but it was something that was outside our control,” Joseph said.

Eventually, he himself was caught up in Saddam’s political maneuverings and his Arab Ba’ath socialist Party’s attempt to stamp its ideology on the nation.

“At that time in school, we were actively engaged by Saddam’s ultimate party control over the nation. We had to do compulsory rifle and military training. And Iraq was pushing for the liberation of Palestine so once a year we had to go in to the centre of the city for a demonstration in support of Palestine marching with flags,” Joseph said.

“But still, at this time as a Christian minority, we were protected. There was no direct threat against our existence in the country,” he said.

But with the fall of Saddam, that all changed. Iraq plunged into many years of lawlessness, anarchy and tribal rivalries exploded into mini-wars

“There were only the mafia on the street and gangs of radical Islamists taking control of everything,” he said.

“Eventually the US Army started to take back control, they started to reconstruct the country and established a new government and new security measures.

“I worked for the US Army as a bi-cultural advisor, helping them understand Iraqi culture and trying to make sure local Iraqis understood what was going on – and that became an issue for me later.

“But people from minority groups became vulnerable. People, even nuns, were being killed by the radicals. It was a very dangerous time.

“The cleansing of minorities started in 2003,” he said.

“But as Christians, we had no tribal system of support the way Muslims do. So our only hope was the return of proper law and order,” Joseph said.

It was at this time that events forced Joseph and his family to take their fate into their own hands.

“I had received vague threats and so had my father who was a member of the Middle East Council of Churches,” Joseph said.

“But one day in 2004 a Muslim friend of mine – a young man I had grown up with – told me my name was on list posted in a local mosque of people to be killed. He told me not to go outside that I should leave,” he said.

“Without that warning, I wouldn’t be here today – I would not have survived.”

Joseph said his work with the US Army had led to him being labelled an ‘infidel’ by some radical groups.

“We decided to leave – then and there. We decided it was better to lose our possessions – our house, cars, jobs and studies – than to lose our lives,” he said.

“So, we escaped and fled to Syria.

“We had no clue what to do. We knew nothing about refugees or resettlement. The only thing we were told was that we should go and see the UNHCR.

“So, we rented a house in Damascus using our own savings,” he said.

With few resources and dwindling cash, Joseph’s family had to find ways to survive.

Joseph worked as an interpreter and translator and his family received support from extended family members already overseas while they worked out their next move.

“We applied to come to Australia twice. The first time we were rejected after nine months and the second time after three months. We weren’t told why? Joseph said.

“We also applied to the US, Canada, Germany and France – which also rejected us.

“We were looking for any hope. Anything to secure our dignity.

“The third time we applied to Australia, we were accepted but this process took two and a half years.

“At this time I was seeing my friends in Iraq graduate and start work while I was doing nothing.

“I had to start all over again from scratch when we arrived in Australia in 2006,” he said.

But Joseph says he and his family were warmly welcomed in Australia.

“We were welcomed in the first few days by family and friends already here and then by Centrelink and by the settlement staff at AMES,” he said.

After a few weeks, Joseph became anxious about what the future held. And over the next few years he struggled to establish a career.

He studied an administration course at TAFE and found work as a bilingual tour guide with Parks Victoria.

“We were trained over three months about Victoria’s national parks and the flora and fauna so we could go out into communities and help CALD people access parks,’ Joseph said.

He became a youth leader in his community and a volunteer.

To make ends meet he worked in a Muffin Break café in a shopping mall.

“I started out washing dishes and was eventually promoted to barista. After six months, I was the acting manager,” Joseph said.

But his new pathway became clear when Joseph was told by a friend that settlement agency AMES was appointing new refugee liaison workers called ‘community guides’.

“I applied and three months later I got a call. I joined the training program and for the first time I was getting paid as a professional,” he said.

Joseph flourished at AMES and was given the opportunity to attend settlement and multicultural forums to present his story.

He changed job to become a housing worker, helping newly arrived refugees secure appropriate and affordable long term accommodation. In the meantime, he began studying a degree in applied management.

“My work is to manage programs that promote safety, stability and development of vulnerable children, young people and their families; and builds capacity and resilience for children, families and communities,” Joseph said.

“We also offer opportunities for young people to volunteer, participate in mentoring, receive study and career advice, gain practical and real-life skills and training and increased connections with their community and support them in the employment readiness arena,” he said.

“It is rewarding work especially being a former refugee and I’m passionate about making a contribution to helping refugees who have come after me,” he said.

“I’m grateful to Australia for giving my family a safe place to live and there are opportunities for everyone here.

“Everyone can succeed in this country if they challenge themselves. I’m still trying to succeed, still learning, still looking for new ideas and better ways of doing things,” Joseph said.