Stories of the Rohingya

Members of Melbourne’s Rohingya community have shared their personal stories with iMPACT Magazine in a bid to highlight the plight of their compatriots who have become the victims of a bloody and ruthless crackdown by the Burmese military.

“We want to the Australian people to know what’s going happening to the Rohingya and that the Burmese Government is lying to the world,” said Rohingya community leader Hamid Abdul.

The number of Rohingya refugees who have fled the violence in Myanmar has now hit a staggering 600,000 in less than two months.

A simple Google search convinced Burmese Rohingya refugee Majid Abdul that Australia was the only place he could build new life; free from the persecution and the threat of prison or death in his homeland and the penurious hand-to-mouth existence he had fallen into in Malaysia and Indonesia.

Now in Australia, Abdul has rebuilt his life but he fears for the hundreds of thousands of Rohingya still in Burma or in refugee camps in neighbouring Bangladesh. 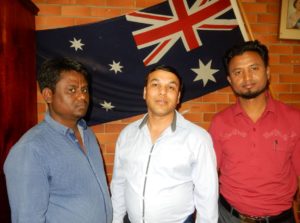 Abdul was a student in Burma but only because his parents had enough money to bribe the authorities to let him enrol in school.

Generally, in Burma Rohingya are not allowed to study beyond primary school. Abdul finished primary school in his village and went on the high school but and then higher education.

He had to leave his village to take on higher education but being away from his family and his precarious status as a Rohingya took its toll.

“There was a lot of discrimination against us and I was beaten up by my classmates,” Abdul said.

“In the end I felt it was not worthwhile and I knew there would be no job for me after I finished.

“I was abused at school when we played soccer, the other boys would kick me instead of the ball because I was Rohingya.

“I wore pants to school but I was told I was not allowed to because my people traditionally wore sarongs. I wanted just peace and to be left alone at school that didn’t happen,” he said.

Majid moved to the capital Yangon hoping things would be better. He stayed with relatives there but was forced to flee again.

“The police would come to your house at midnight asking to see peoples ID cards. I didn’t have one so I was scared,” he said.

“Eventually my relatives didn’t want me because if I had been arrested it would have been a big problem for them.

“Finally I decided to flee to Thailand and I walked across the border and from there went to Malaysia.

“There are some Rohingya in Malaysia and I thought I could find some work there,” Majid said.

He found work in construction but was paid paltry wages and sometimes none at all.

“I had to work to survive but I was not paid very much and sometimes they didn’t pay me at all,” Majid said.

“Each time I bribed them and they released me,” he said.

Abdul said he realised he needed to find somewhere new where he could build a new life.

“We were not of value to anyone in Malaysia. The police would often take our money because they could,” he said.

“And I was worried about my parents and how they would feel if I was sent back and killed by the government.

“I did some research using Google and I came up with Australia as the best country for me and I decided I would try to get here.

“We knew it was risky to go by boat to Australia but we decided it was better to die at sea than to go on living the way we were,” he said.

Majid worked and saved money and eventually crossed the border into Indonesia among a group of eight Rohingya.

He said the group couldn’t find any smugglers to take them so they pooled resources and bought and old fishing boat.

Not knowing anything about boats or navigation, they hired an Indonesian crew.

“We didn’t really know where we were going and after five days and five nights we were still in Indonesia. We thought we were in Australia but we were arrested and sent to a detention camp at Kupang,” Majid said.

He said the group was interviewed by the UN but were not accepted as refugees because they had no identification.

“We were sent from Kupang to Medan, also in a detention camp, but the UNHCR gave us some better accommodation there,” Majid said.

“I asked them how long we would be there and they said some people had been there ten years.

“It was then that I realised that I had to get myself to Australia,” he said.

Majid joined another group and they bought another boat and after four days they arrived at Christmas Island.

“This was in 2009. I spent five months on Christmas Island and then was transferred to Darwin. I had finally made it to Australia,” he said.

Majid spent a total of two years in detention in Australia before being released in 2011. He now lives and works in Melbourne and has applied for Australia citizenship.

But that has been held up because he does not have identity documents.

“I have started a new life here. I’m safe and this is where I will stay,” he said.

He had been trying to visit relatives in Sittwe, the capital of Burma’s Rakhine state, when he was arrested by the police.

“I was going to visit some relatives in the city and the police stopped me and arrested me. I was taken to Yangon and I went to court,” Abdul said.

“I tried to explain I was going to Sittwe to see my family but they didn’t listen to me.

“I was jailed for four years and I never found out what I was charged with,” he said.

Abdul said jail in Burma was a traumatic experience.

“It was horrible and very dangerous. And you had to work to eat,” he said.

“My family didn’t know where I was. They thought I was dead. After two years a person from the IOM (International Organisation for Migration) visited the prison and wrote a letter to my family telling them where I was,” Abdul said.

“There were 200 people I my cell and there was not a proper place to sleep. We had to guard each other at night so we wouldn’t be attacked and robbed of what little we had,” he said.

“I worked making bricks in jail and we had to grow our own food to eat.

“We were told the prison had no budget to feed us so we had to work – but there was never enough food,” he said.

Abdul said there were about 1000 Rohingya in prison with him in Yangon.

He was released after four years and decided immediately to leave the country.

Abdul travelled to Thailand and then Malaysia and Indonesia. He was married in Malaysia in 2010 and his first child was born in 2011.

The following year with their one-year-old son in their arms, Abdul and his wife made the perilous boat journey to Christmas Island.

“We arrived there on April 1, my child’s first birthday,” Abdul said.

“All my life in Burma I was persecuted by the Burmese authorities and the Burmese people,” he said.

“One day, I remember, I was going school and a couple of Buddhist people stopped me, abused me and beat me. I could never have gotten a job in Burma – we had no right to work – and my family always faced discrimination.

“Now, I have a good life in Australia but I worry about my family still in Burma,” said Abdul, who works in gardening and landscaping in Melbourne’s south east.

Fears that the police would come to his village and kill him convinced Burmese Rohingya refugee Arifullah that he had no future in his homeland.

“Life was very difficult for us. We could not study, we had no work and really no life,” Arifullah said.

“When the political situation got worse we were scared of the local police. People were killed or just disappeared,” he said.

“They were particularly targeting young men so I decided I needed to get out,” Arifullah said.

He came to Australia by boat in 2013 and is now on a bridging visa.

But he has grave fears for his family who have fled to Bangladesh in the wake of the Burmese military’s bloody and ruthless crackdown on the Rohingya people.

“Life for my family in Bangladesh is very difficult. They are living in crowded and dangerous places,” Arifullah said.

“There is fever and sickness there and we trying to do everything we can to help them,” he said.

Arifullah is a student.