Studying and striving in wartime – a refugee’s story 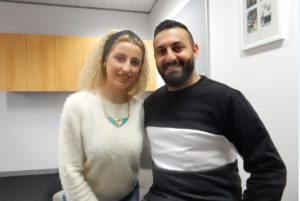 Studying by candlelight in the bowels of an ancient convent as a bloody civil war raged around her, Jamila Alarkan stuck doggedly to her dream of becoming an engineer.

The Syrian refugee endured the effects of war, sickness and physical injury to pursue an education and the chance of a bright future.

Amid some of the fiercest fighting of the Syrian conflict and the destruction of the ancient city of Aleppo and with friends and classmates being killed at random, Jamila stuck to her studies – not knowing if she would ever have a chance to use the knowledge she was acquiring.

For five years she battled the fallout from the conflict that has devastated her homeland, eventually graduating with a degree in mechanical engineering.

But with Syria in ruins and little chance of work, she and her husband Tony took the gamble of their lives and left their families and left everything and everyone they had known and loved in search of a future.

Now, settled safely in Melbourne, they have started down a pathway to resurrect their professional careers in Australia.

This week, Jamila shared her story with iMPACT magazine.

“Engineering has been my passion for as long as I can remember. My hero is my sister Dahlia who is 10 years older than me and an engineer,” she said.

“I’ve always loved mathematics and science and when Dahlia studied engineering, I loved the drawings she used in her course,” Jamila said.

“I’ve always enjoyed building things and making things work and I really love problem solving and finding solutions so I knew I wanted to be an engineer when I grew up,” she said.

In 2010, Jamila, whose family lived in Tartus on Syria’s Mediterranean coast, was accepted into university in the ancient city of Aleppo, in the country’s north, and began her engineering studies.

“It was an exciting year and I finished my first year with very good marks. This first year was very happy,” she said.

“All my subjects were available and I was learning English and we lived a normal and safe life.

“At that time, life in Syria was good. Before the war we had a perfect life.

“Before the war my parents worked in farms and my father worked two jobs so that they could secure all that we needed during our studies at school and at university. They struggled to give us a lovely childhood and a good education.

“Back then, our relationships with other communities were good and we had a lot of friends from different sects. We lived in one society and all studied together in one school or university.

“But during my second year at university, the war began in many parts of Syria and it finally reached Aleppo,” Jamila said.

“Despite this terrible situation, I finished my second year and passed all my subjects,” she said.

But the situation took a turn for the worse for Jamila and most other Syrians in 2012. The war escalated significantly and Aleppo was besieged – cut off from the rest of Syria – as the fighting intensified.

“There was no way that the city of Aleppo could be reached from outside so I could not go back to the university for my third year,” Jamila said.

“I was able to register at another university in a less dangerous city, Homs, 200 kilometres to the south, but I could not study all the basic third year engineering subjects because this university did not offer the same specialisations,” she said.

“I went back home empty handed to my family in Tartus. I was heartbroken because I could not complete my studies.

“My university was besieged by war, all my dreams to become an engineer crashed and the war was spreading all over Syria. The situation was serious and getting even worse,” Jamila said.

She says she lost her desire for life and was depressed about the situation. She lost her appetite and suffered severe anaemia, shortness of breath and sleeplessness.

“After a few months, a road was opened to Aleppo. This was not really safe but it was the only way I could get back to my university in that city. I made my decision to complete my studies no matter what. So I decided to attempt to reach Aleppo via this road.

“My family were opposed my decision as they feared for my life.

“That period was one of the worst I’ve ever experienced but despite their concerns and the dangers, I didn’t change my mind.

Jamila took a dangerous 12 hour bus into Aleppo and back to my studies.

As a Christian, she lived in a Convent near the university, along with other students and the nuns.

“We were subjected constantly to conditions of war such as lack of water, electricity, food and safety,” Jamila said.

“The city was under siege and sometimes I was disconnected from my family for weeks as with no electricity, I couldn’t charge my phone,” she said.

“Most nights we slept in the shelter of the Convent because of missiles and explosions. Many of my friends died in this war. And one of the nuns who sheltered us died in a bombing incident near where I was sleeping in the Convent.

“One time I was hit in the leg and had to go to hospital for one week.

“I was also poisoned several times due to the remnants of war – our water and food were contaminated by chemicals and the terrorists threw bodies into the city’s water supply from where we obtained our drinking water,” Jamila said.

Despite the conflict and the dangers and privations it brought, Jamila managed to graduate after the five years of study.

She told how she studied by candlelight for hours each night in the convent.

“These were difficult time and it’s very hard to remember how we all survived all this terror,” Jamila said.

“I came so close several times to being seriously injured – or worse. But, in spite of all these difficulties, it was at this time that I met my husband Tony.

“We met each other in Homs when a friend introduced us and we married in 2017.

“Tony’s life was also very difficult and he has his own stories about that war. He studied electrical engineering and after he graduated, he studied for his Masters in Alternative Energies,” Jamila said.

The couple built a house in Homs to live in after they were married but after this was destroyed by missiles.

“We had no choice as we could no longer live there,” Jamila said.

“We were faced with the situation of having no work, no home, no safety and no future in this endless and horrible war,” she said.

“So, we decided to leave our families and our beloved country to flee to a safe place so we travelled to another country, Iraq, to apply for humanitarian visas for Australia,” Jamila said.

The couple waited in Iraq for eight months before being granted visas.

“We were very lucky that our request was accepted and we were able to come to Australia,” Jamilla said.

Tony also had a difficult time during the conflict.

“I grew up in Homs. I graduated in electrical engineering at the university there in 2011,” Tony said.

“But Homs was where the war first began. When it started we went to our home town in the countryside near Homs and stayed there a year,” he said.

“After a year I was able to start a Masters Degree at Homs.

“I couldn’t travel there in the interim because of the fighting. At the same time I started work at an oil refinery in the city.

“The refinery was a strategic place for Syria – one of only two in the country – so it was attacked by ISIS.

“ISIS shelled the refinery and some days we could go there – but sometimes we had to go to keep the place running,” Tony said.

“There were a lot of factories and companies in Syria before the war – especially in Aleppo. But they were destroyed by ISIS, who also took a lot of the equipment out of the country,” he said.

“But I think Syria can recover economically in time,” Tony said.

The couple arrived in Australia in November, last year, and now live in Melbourne’s north. They speak to their families in Syria each day.

“We miss them so much but we are safe and we have many friends here now,” Jamila said.

Jamila and Tony are studying English at AMES Australia, preparing for the IELTS test which is part of the process of having their professional qualifications recognised.

The both hope to soon launch the careers in Australia as engineers.

“We can’t wait to start our professional lives here in Melbourne, to contribute at last and to be part of our new society,” Jamila said.