As a small boy Peter Kon was forced on a month-long march across rugged bushland away from his family and village. 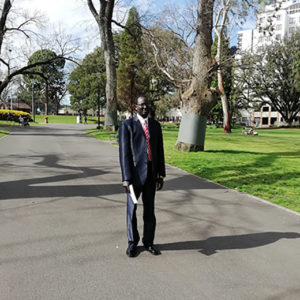 For the next 18-years a refugee camp would be his home and disease, starvation and death his constant companions.

But the South Sudanese refugee refused to give up his dream of a future.

Now resettled in Australia, the 40-year-old has gained multiple tertiary qualifications and has worked in the humanitarian sector for agencies that support newly arrived refugees.

He has become a leader in his community and is at the centre of grappling with issues around disengaged South Sudanese youth.

“As a young boy, I lived in a village in the countryside,” Peter told iMPACT Magazine this week.

“It was a happy life, free of stress. We had livestock and we grew native foods in our garden,” he said.

“But then in 1983 war came and things changed very much for the worse.”

Sudan in the 1980s was governed by an Islamic regime based in Khartoum, in the north of the country. When Christian groups in the south formed to push for an independent nation the Khartoum government targeted them using armed militias, including the infamous Janjaweed.

“Things became very bad for us. The government in Khartoum began kidnapping young boys and pressing them into the army – some of these boys were as young as nine,” Peter said.

The story of Africa’s boy soldiers has become well known, the subject of a series of books and films.

The Sudan People’s Liberation Army (SPLA) formed by Christian groups in the south to oppose the Islamic government in Khartoum began rounding up young boys and taking them to Ethiopia with promises of keeping them safe from the government.

Peter was one of these ‘lost boys’ – forced to walk across rugged bushland with little food and no protection from marauding government militia or even wild animals.

“The SPLA came and said that they were taking all the boys to safety. So in 1987, I left Sudan,” Peter said.

“We walked for a month to get to Ethiopia. We walked mostly at night and we slept under trees,” he said.

“Sometimes there was no food and some boys had no shoes. We ate wildlife and native fruit.

“It was a very hard time – some of us were just nine-years-old and we missed our parents.

“It was like sleepwalking. I remember some boys were lost in the bush and some others were attacked by wild animals,” Peter said.

Eventually, the boys reached the Panyido refugee camp in Ethiopia – home to around 16,000 mostly boys. But things were hardly better.

“For the first month we were in the camp there was starvation and disease. Cholera took many lives,” Peter said.

He says as a nine-year-old, he was forced to grow up quickly.

“I remember we would sell what little clothing we had to get enough money to buy a donut. My friend and I would share the donut – for us, that was great day,” Peter said.

At other times a few ears of corn would be his daily food ration.

“If someone died we would just bury them in the camp. As boys, we didn’t have the strength or tools to dig deep graves so sometimes the bodies would come back up if it rained and they would smell,” Peter said.

“It was a horrible time for us,” he said.

After a few months, the UNHCR arrived bringing food supplies and medicines.

“The UNHCR came and life improved. But still some people died because they got sick after eating too much food,” Peter said.

“They had not eaten much food for so long that when there was plenty of food it still made them sick. That is a horrible memory,” he said.

“And although things were better we still had dirty clothes, lice and scabies.”

After five years at Panyido, a change in the Ethiopia government meant that South Sudanese refuges were expelled from the country.

Peter and his fellow young refugees were transferred to the giant Kakuma camp in Kenya, home to refugees from the 1990s and still, with 60,000 residents, one of the largest camps on the planet.

“At first there were no facilities in Kakuma but the UNHCR arrived and build schools and a hospital,” Peter said.

“The camp really gave me a jump start because I went to school there,” he said.

In Year 8 Peter won a high school scholarship that saw him attend a Kenyan government boarding school a day’s travel from the camp.

Sponsored by the Jesuit Refugee Service, Peter completed high school in 1999. He gained a place at university in Kenya but did not have sponsorship to take up the opportunity.

Instead, the Jesuits recommended him and others to the Australian High Commission in Nairobi for resettlement.

After sitting through interviews and background checks, Peter was given a visa to settle in Australia in 2003, bringing with him his two younger brothers who were also taken from their village to avoid government militia.

Peter completed a Batchelor of Commerce Degree, a Masters of Business Administration and a Masters of Finance at Victoria University between 2008 and 2015. He has since worked from humanitarian agencies – including Spectrum MRC, Red Cross and AMES Australia – helping to settle refugees in Melbourne.

“I wanted to work in the sector to give back and help people. I think it’s important that people get opportunities to flourish just as I was helped when I arrived.

He recently built a home at Melton, north-west of Melbourne, where he lives with his wife and five children.

Tragically, Peter’s father was killed in the civil war and he recently lost another brother to illness.

His mother still lives in South Sudan and he is in regular contact.

Another passion for Peter is working for his own community and he is especially driven to help young people.

He accepts there are issues that need addressing in terms of recent negative publicity around South Sudanese youth.

“I can’t deny there have been issues with some oy out youth. But by far most of the kids are good kids who just want an opportunity to do something with their lives,” Peter said.

He says the issues around youth in his community are complicated and many of the young people have come here as troubled survivors of a brutal civil war.

“Many of these young people have just one parent and many of them understand the system and language here better than their parents do. This can lead to problems.

“So when they can’t understand the teacher they feel pressure and eventually become disengaged.

“We need to motivate them to reengage and we need strong community leadership to do that,” Peter said.

“Refugees come with lots of skills and knowledge and can contribute to the society. After 15 years, I am Australian,” he said.

“I’m committed to this beautiful country and I’m thankful to the Australia government for giving me a chance to build a life.

“That’s what some of our young people need – a chance to make something of their lives.

“It’s all about opportunity,” Peter said.