Refugees who have come to Australia as a result of the conflict in Syria and Iraq are overwhelmingly happy, and feel safe and welcome, according to the first survey of settlement outcomes for this group of new arrivals.

And the data shows that Syrian and Iraqi refugees living in Victoria feel the most welcome, and feel they have the best schooling arrangements of any state. 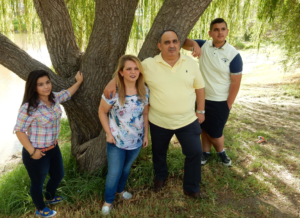 They are also largely proficient in English, happy with the amenities in their local communities and their children’s schooling arrangements, the study found.

But it also found many have struggled so far to find paid employment.

The survey – carried out by researchers from the University of Technology Sydney (UTS), Western Sydney University (WSU), the University of Sydney Business School and AMES Australia – canvased 200 families who have settled in Victoria, NSW and Queensland about their lives in Australia.

The families are among the special one-off intake of refugees from the Syrian conflict that was announced by the then Prime Minister Tony Abbott in 2015.

Victoria was also the only state to record no none saying their schooling was “bad” with 62 per cent saying it was “very good” or “excellent”.

Just over 40 per cent of refugees across the country said it was “easy” to talk to their neighbours.

Lead researcher Professor Jock Collins, of UTS, said that all of the refugee parents in Victoria thought there was a bright future for their children in Australia and three out of five adults, or 59 per cent, said they were “very happy” or “mostly happy” with their lives in Australia.

He said across the country just over 40 per cent of refugees said they understood English “well” or “very well” and around 20 per cent said “not at all”.

But just 12 per cent of adult refugees surveyed nationally were in paid employment, the survey showed.

AMES Australia CEO Cath Scarth said that it was clear that all of the newly-arrived Syrian and Iraqi refugees were grateful for the safety and opportunity Australia provided them.

“We are seeing that employment is a priority for most people and can be a struggle but all of the people we surveyed are optimistic about the future and that Australia will provide a great future for their families,” Ms Scarth said.

“It is pleasing that all of the families surveyed are satisfied with the on-arrival services provided to them by organisations like ours,” she said.

“But many of these people had highly-paid professional jobs in Syria and Iraq before the conflict and their greatest priority is to find work in Australia.

“We know that these are resilient and proud people who are not content to rely on welfare. But they face barriers to entering the workforce and starting to contribute to society.

“Some of the barriers they need support to overcome are a lack of Australian work experience and English language proficiency.

“Investing more in helping overcome these barriers will pay dividends not only for individual families but for communities and Australian society as a whole into the future,” Ms Scarth said.

Iraqi refugee Osama Butti, the first of 12,000 extra refugees accepted by Australia because of the Syria-Iraq conflict says he is grateful to have found a safe place for his family in Australia.

“We are very happy to be here in Australia and life is good for us,” Mr Butti said.

“My children have settled well and are enjoying school,” he said.

“But for me, finding permanent, ongoing employment has been a challenge,” Mr Butti said.