Home » Lead story » The girl who swam to freedom

The girl who swam to freedom 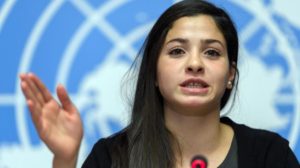 Yusra Mardini, the Syrian swimming champion who famously helped to save fellow refugees on a sinking raft in the Aegean Sea, has released a book that tells her traumatic story and also sheds light on the horror of the global refugee crisis.

Yusra’s book, titled ‘Butterfly’, tells how she and elder sister Sara paid smugglers $US1,500 each to cross from Turkey to Greece, after they fled war-torn Damascus.

It describes how they were packed into an overloaded four-metre inflatable dinghy when they set off to reach Europe in August 2015.

Known as ‘the girl who swam to freedom’, Yusra, now 20, later swam at the 2016 Olympics and became the youngest ever UNHCR Goodwill Ambassador, meeting Barack Obama and Pope Francis.

Her book is inspiring other refugees and is imbued with a simple message that Yusra has repeated often when speaking publicly: ‘never give up’.

Fifteen minutes into their journey toward the Greek island of Lesbos – just ten kilometres away – the dinghy’s engine died in rough seas and its occupants were tossed around helplessly by high waves.

As it seemed the craft would sink, the passengers began to pray.

But Yusra and Sara, who had both swum internationally for Syria, jumped into the water to try and stop the boat capsizing, clinging on to try and keep the flimsy dinghy headed in the right direction.

The book tells how the sisters swallowed sea water while being buffeted by waves, their eyes stinging and muscles straining while passengers – including families with small children – frantically used their mobile phones to try to call for help.

They eventually made contact with the Greek coastguard who simply told them to turn back, but they could not reach the Turkish coastguard.

The Mardini sisters clung on for three hours, their muscles aching from the cold and their skin chafing from their life jackets.

Another, larger boat filled with refugees sped past, ignoring their cries for help as darkness began to fall.

Suddenly, the engine was restarted and the sisters, who had been in the water longest while the male passengers took turns to help them, climbed back in the boat.

Shivering with cold, Sara volunteered for one last stint in the water to reduce the dinghy’s weight and they landed on a Lesbos beach.

“Being a refugee is not a choice,” Yusra says in the book, also saying that she hates the word because it dehumanises people and evokes thoughts of borders, barbed wire, bureaucracy and humiliation.

“Our choice was to die at home or risk death trying to escape,” she said.

Her story is being made into a feature film by director Stephen Daldry, of Billy Elliot, The Hours and The Reader fame.

In Syria, Yusra had lived through four years of escalating violence which claimed the lives of friends who were killed by air strikes and shelling.

She decided to leave after a rocket propelled grenade smashed through the ceiling of the building where she was training.

She survived only because it failed to explode, laying inert at the bottom of the swimming pool.

After reaching Greece, the refugees encountered both kindness and hostility in equal measure as they joined tens of thousands of fellow Syrians, Afghans and Iraqis fleeing conflict.

They embarked on an odyssey by foot, ferry, car, bus and train through Greece, Macedonia, Serbia, Hungary and Austria.

Their near-death experience at sea welded the group together and spurred them on towards their final destination, Germany.

Movingly written, the book conveys the horror of refugees escaping conflict in Syria, Iraq and Afghanistan through personal anecdotes and stories.

Yusra tells how they were badly treated in Hungary, where smugglers cheated them out of a large sum of cash and police officers humiliated them, locking them in a stable, hurling bad food over the gate and then taking them in a police van to a refugee camp.

In the late summer of 2015, when the refugee crisis peaked, Yusra was among tens of thousands of refugees stranded at Budapest train station as German Chancellor Angela Merkel decided to let them travel to Germany in a humanitarian gesture.

As a result of Ms Merkel’s open-border policy, 890,000 asylum-seekers arrived in Germany in 2015. Yusra and Sara were among them, greeted by the “Refugees Welcome” signs as their train arrived at Munich station. 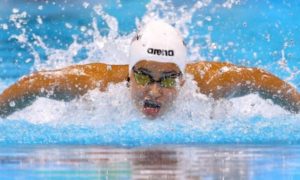 Yusra resumed swimming and, helped by a German coach, she was selected for refugee team that competed in the Rio games in 2016.

In the book, she says she was ambivalent about swimming for a refugee team because she did not want to be defined as stateless and a recipient of charity.

But she decided to swim to try to be a role model to others who have fled war, by showing it is possible to overcome difficulty.

Named in People magazine’s 2016 list of people who were changing the world, Yusra lives in Berlin and is training for the 2020 Tokyo Olympics.

‘Butterfly’ is published in Australia by PanMcMillan and is available in most bookshops from May 8.