The population debate – what’s a stake 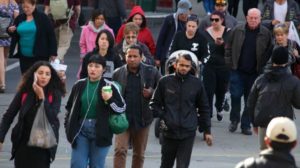 In just a matter of weeks, Australia’s population will reach 25 million; a milestone that has come around much quicker than expected.

Twenty years ago, there were estimates that our population wouldn’t hit the 25 million mark until 2041.

Concerns about immigration seemed to have crept up on us and maybe the 25 million figure has spooked the horses.

And the debate seems to have straddled the political divide with liberal politicians calling for a moratorium, Pauline Hanson demanding a plebiscite and Labor leader Bill Shorten questioning the number of temporary migrants in Australia.

Even the likes of Bob Carr and Dick Smith have weighed into the debate, adding a touch of eccentricity.

So, what will cuts to our migration program really mean?

For a start, Australia has a rapidly ageing population. This could have potentially disastrous economic consequences for the future as the proportion of people exiting the workforce rises and increases the reliance on a shrinking number of income taxpayers.

ANU demographer Dr Liz Allen says the latest available research suggests immigration levels at about 160,000 to 210,000 would seem to have the best impact by 2050 on our ageing population and the rate of growth of GDP per capita.

Dr Allen says current Australian Bureau of Statistics modelling gives an idea of what Australia’s demography would look like under a number of scenarios.

Obviously, the higher the net overseas migration level, the bigger the population over the projected years.

“Interestingly, though, while zero net overseas migration would result in a reduction in population by the year 2070, the population would still continue to grow in the medium term due to natural increase,” Dr Allen says.

She argues that population composition is at least as important as overall size; and that age distribution is essential to understand the economic opportunities and challenges a population faces.

She says the ‘dependency burden’ – the ratio of the number of children and older people as opposed to working-age tax-payers – is higher for the zero and low net migration levels.

Basically, she argues that we have got migration about right and that changes to the program should be from an evidence base.

So, what is working here?

Recently, some of our politicians have leveraged the disconnect between Australians’ support for high levels of migration and their concerns about population growth in some of our cities.

Talk of ‘African gangs’, ‘foreigners rorting welfare’ and ‘full cities’ have lent an aura of hysteria to the population debate and people, particularly on the conservative side of politics, have made hay.

Add to this the fact that successive state and federal governments of all persuasion have failed to plan and build infrastructure to cope with the obvious population pipeline created by our migration program and you have a recipe for disquiet.

Some experts say that part of the problem is that we lack a national transport or housing policy.

Economist Saul Eslake points to the fact that Australia’s major cities had faster growth rates in the post-war boom of the 1950s and 1960s, but didn’t suffer the problems currently besetting them.

He says an over-arching national policy on planning, including a strategy for settling migrants in regional areas, could yield positive results.

Other experts have called for a rational discussion on population and economic planning that leaves out the emotive language of dog whistle politics.

Former immigration bureaucrat Abdul Rizvi says that leadership is required. He says that significantly cutting migration levels is an economic “gamble” that the government has not explained to the nation.

Mr Rizvi says net migration of less than 150,000 a year and a population growth rate closer to 1.2 per cent per annum is quite possible and that this would have implications for forecasts about Australia’s economy, and particularly gross domestic product.

Migration has been major factor in driving Australia’s economy. It has seen the nation acquire a generation of skilled workers, it has propped up the construction industry for the past two decades and the education of overseas students has become the nation’s third biggest export earner.

So, as many US political pundits are wanting to say – in regard to what’s at stake with any drastic changes to Australia’s migration policy – ‘it’s the economy, stupid’.