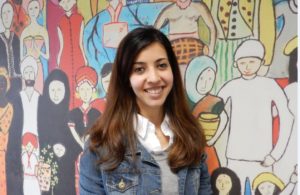 As Iraqi-Palestinians, they have been forced to flee their homes three times in the past half-decade as conflict after conflict has plagued the Middle East.

Forced to leave her home in Iraq in 2007 after violence against Palestinians flared in the aftermath of the fall of Saddam Hussein, she and her family found temporary refuge in Syria.

Wafaa’s family moved to Syria but the respite did not last long when Yarmouk camp became a war zone.

“We went to Syria in 2007 searching for safety – just after I had completed my degree in civil engineering, the complicated situation in Syria started,” Wafaa said.

But the recent rising tide of violence in Syria saw her family apply to come to Australia through UNHCR program and in November last year they were granted visas.

“It was like a miracle. We could not stay in Syria because the difficult situation there,” Wafaa said.

Now, the 30-year-old, has set out to rebuild her life in Melbourne.

As a civil engineer, Wafaa has experience in designing and building steel and concrete structures.

Now she is undertaking the Career Pathway Pilot program for refugees with refugee and migrant settlement agency AMES Australia.

She is also hoping to do a paid internship with Career Seeker Programme before launching her career here.

Wafaa’s fiancée, Syrian engineer Hussam, is still in the Middle East but she hopes to be able to bring him to Australia.

“I worry about him because the situation in Syria is not safe. We talk every day and I hope he can come here and we can be married, and raise our family” Wafaa said.

“Life in Australia is very good. I am very lucky and grateful to be here and to have a chance to continue my career,” she said.

“Thanks Australia to give us the relief feeling and feel safety,” Wafaa said.