For twenty years Bernard Vancuylenburg has been volunteering to help newly arrived refugees and migrants learn English and settle in their new country.

A migrant himself, he has found a mission in life to support new migrants with English language proficiency and also to assist them to become comfortable and orientated in their new lives in Australia.

Working with migrant and refugee settlement agency AMES Australia in Melbourne’s south east, he has helped dozens of people find their feet in a new land.

“I have never looked back and as a volunteer tutor I am grateful and humbled for the role I play in making a positive impact on the lives of these migrants from different cultural backgrounds,” Bernard said.

He said that volunteering was a two way street which rich benefits and rewards.

“I benefit from the rich cultural interaction and often find that even though I’m ‘teaching’ people, I have also become a learner,” Bernard said.

“I was happy in Ceylon (Sri Lanka) and I had good job there working for a chain of hotels. I was travelling overseas for my job and life was good,” he said.

In 1984 Bernard decided to join his family in Australia.

This time coincided with a rise in tensions between Tamils and the Sinhalese. 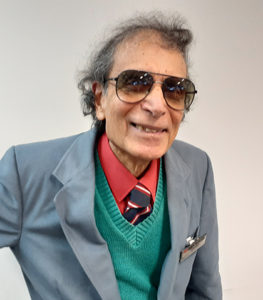 “My brother and my parents sponsored me to come to Australia. Since then, I have enjoyed the opportunities this country offers,” he said.

Bernard had an idyllic childhood growing up on a tea plantation

“I had a great life growing up in Sri Lanka. My father was a tea planter so we had a peaceful life on a tea estate away from everything and with beautiful mountain scenery,” he said.

”I went to a private Catholic College – St Anthony’s College in Kandy – so my upbringing was very rounded.”

On arrival in Melbourne, Bernard worked for three months at the Travelodge on St Kilda Road before sitting the public service exam.

He landed a job with Victoria Police and worked as an Administrative Officer there for the next sixteen years.

“I was made redundant in 1999 and saw an ad in the local paper for volunteer tutors at AMES in Dandenong. I applied and in early 2000 and I started in May,” Bernard said.

Bernard’s skill with languages has held him in good stead as a tutor for newly arrived refugees and migrants.

“As part of my job in Sri Lanka, I had to learn two languages – so I learned German and French,” he said.

“And as part of my work for AMES I was offered the opportunity to learn Chinese or Arabic to help tutor students from those places,” Bernard said.

“I chose Chinese, Mandarin, and I’ve never looked back. I burned the midnight oil learning Chinese and it has helped me to be able to assist Chinese students learning English.

“This was the biggest thing AMES did for me. Without being offered the chance at AMES, I would never have learned Chinese. This has opened doors for me – I’ve visited China four times to see country and improve my language skills; and I have made friendships with some of the people I’ve tutored,” he said.

Volunteering has always been a part of Bernard’s life and it has come to partly define who he is.

“I volunteer because I benefit from it. I get as much as I give. It’s very rewarding,” he said.

“I once volunteered with Mother Teresa in Calcutta for a time. That was an eye opener on a human level and I volunteered even before I left Sri Lanka, helping young people who wanted to get into hospitality.

“Now, I’m into my 20th year of volunteering with AMES. It’s amazing what you learn. Apart from the friends you make, you get to develop insights into life and humanity.

“It’s incredible how grateful people are when they find out you are helping as a volunteer and not a paid teacher. Some can’t believe it. Volunteering at AMES has been like a second job to me. It’s been a very rewarding journey and life experience – it’s been a blessing,” he said.

Bernard’s approach to teaching is holistic.

“When you teach someone, especially students like we have here at AMES in Dandenong, who have no knowledge of English or Australian culture, it’s not just about the academics, it’s about having patience and human skills,” he said.

“Some of the people we work with have come from fractured backgrounds, some have witnessed trauma, some are frightened,” Bernard said.

“In the 1990s and later we had a lot of people coming from Bosnia. They had been through trauma and had experienced losing everything. Many were stressed and struggled to find an even keel.

“In circumstances like these, kindness goes a long way and to a certain extent, you have to try to walk in their shoes and be aware that they are living in a place that is totally alien to them.

“And it costs nothing to be nice to someone. All these things come into play when you are helping someone learn.

“I think life, for me and the people I tutor, is a learning process and you never stop learning. My Dad told me not to think you know everything.

“He said: ‘Be prepared to listen to people who know something you don’t’,” Bernard said.

Over twenty years, Bernard has seen waves of refugees from different counties and as a result of different conflicts arrive in Australia.

“Overwhelmingly, the people I have worked with have been grateful to come to Australia. They see the opportunities this country holds – I certainly did when I arrived,” he said.

“I asked one of the classes I was tutoring what the happiest day of their life was. More than a few said ‘the day I got my visa to come to Australia’.

“I also see people who tell me that here, unlike in their home countries, they are not afraid of the police or people in uniform.

“And women from many countries come here and realise they have a chance at equality. They can do whatever they want and are not necessarily treated as servants of men,” he said.

Aside from volunteering to help new arrivals learn English and adapt to life in Australia, Bernard’s passions are music and travel.

For twenty years, he played lead guitar in a band punching out popular rock ballads at dances and weddings.

And he has travelled extensively, including to Latin America, Turkey and China, where he pursued his interests in history and archaeology.

A little philosophy is not lost him either.

“During my travels in Turkey I came across this proverb which sums up what I try to do beautifully,” Bernard said.

For Bernard, one story sums up his experience of volunteering to help people and the rewards he has reaped.

“A few years ago, I got in a taxi and asked to be taken to a destination. When I got there, I tried to pay the driver but he said “No sir, I am not taking your money because you are the man who taught my father English when I was a small boy’,” Bernard said.

“He remembered me after all those years. These are the things that have made my volunteering such a privilege and a blessing; and have taught me that in life you reap what you sew,” he said.