AMES students on the ball in the CALD Cup 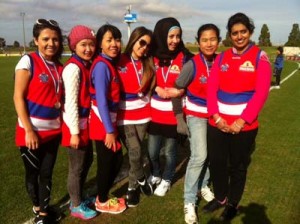 More than 100 AMES students took part in the Western Bulldogs’ annual CALDplay Football Carnival this week at the Whitten Oval in Footscray.

In very chilly weather men’s and women’s teams from AMES Footscray and Victoria University (VU) took on rivals from AMES Werribee/St Albans in a spirited but good natured competition.

The event was the seventh annual CALD Cup hosted by the Bulldogs, the Metropolitan Fire Brigade and Victoria Police. Now a feature of refugee week, the initiative is aimed at forging relationships and strengthening community bonds in Melbourne’s west.

The games were the culmination of a six-week introductory football program in which the participants were taught football skills and met people from other emerging communities.

On the day, AMES Werribee/St Albans lost to AMES Footscray/VU 43-22 in the men’s game.

All of the students got to keep their ‘Doggies’ jumpers and water bottles.

“The guys have shown great commitment and they have all turned up for training. Some of them are even playing in a game organised by the Western Bulldogs on Friday afternoons,” he said.

“It is a great way for them to learn a bit about Australia; and it is good to see the students developing friendships,” Matthew said.