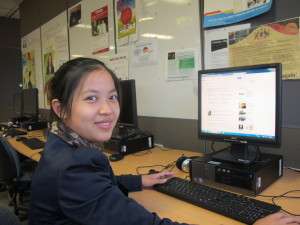 An AMES student was able to save her own daughter’s life because she had completed a first aid course organised by her teacher.

Srylyhung Tao tells the harrowing story of helping her 19-month-old daughter Samalisa start to breathe again after she choked and became unconscious during a bout of fever.

When Samalisa came down with a fever and high temperature ‘Hung’ took the girl to several doctors and hospitals and, as her temperature oscillated around the 39 degree, mark she became increasingly worried.

“It came to head one evening when her temperature reached 40 degrees,” Hung said.

“I called an ambulance and we went into the hospital but then her temperature came down and so we went home. But that night the temperature went up again and my daughter started choking and became unconscious and her breathing stopped.

“I called the ambulance again and then I started to panic. But I realised that panicking wouldn’t help.

“Because I had done the first aid course I knew how to clear her airways and I did that.

“She had gone pale and limp and stopped breathing but when I put her head back and cleared her mouth she started breathing again. I was so relieved I cried.

Her AMES teacher Julie Holland said that Hung was motivated and eager to learn.

“If she hadn’t done the CPR/first aid course she believes she wouldn’t have been able to save the child,” Julie said.

The experience of almost losing her daughter and her time volunteering to help HIV patients back home in Cambodia has led Hung to want to pursue a career in nursing.

With the help of her AMES teacher and counsellor she has mapped out a pathway that will see her improve her English and then embark upon Certificate III and IV courses in general nursing at TAFE.

“I want to work as a nurse because I really enjoy helping people and making a difference in peoples’ lives,” Hung said.

For more information on this story, contact the Communications Unit on: 9938 4031.