Refugee honoured by the AFL for community work

An Iraqi refugee and AMES Australia volunteer has been recognised by the AFL for his community work.

Osama Butti was honoured as the Carlton Football Club’s ‘Community Champion’ during the AFL’s ‘Toyota AFL Multicultural Round’ this week for his work as volunteer with AMES Australia working with refugee communities in Melbourne’s north.

Mr Butti and his family attended the Carlton vs Geelong match at Etihad Stadium on Saturday night as a special guest.

“I was very honoured and humbled to be recognised and it was a great experience to go to the game,” he said.

AMES Australia CEO said Mr Butti’s work with refugee communities embodied the desire most refugees have to contribute to Australia.

“Osama is typical of so many of the refugees we see. They are all grateful to be here and want to give back to the nation that has given them a safe haven,” Ms Scarth said.

Carlton Football Club spokesman said the Multicultural Round gave the opportunity to celebrate the diverse cultures that make up AFL.

“We highlight the contribution multicultural communities have made to the game’s history and welcome new communities to embrace Australia’s game in the future,” he said.

Mr Butti and his family fled Iraq in 2016 after life became intolerable for himself and his family. As Christians, they were the target of threats by extremists. They were among the first to arrive under the federal government’s intake of an extra 12,000 refugees from the Syria-Iraqi conflict.

“After the dramatic circumstances when ISIS entered my country, a lot of things came to the surface. There was a fear among a lot of people in my country, especially the Christians, of what would happen,” Mr Butti said.

“Even though ISIS did not attack us personally, a lot of things did happen, especially at school with my children. Their friends and classmates started to tell them ISIS would come and kill all the Christians, things like that.

“And also, because of my work with international companies, I was very afraid. If I remained in my country, I would have been a target,” said Mr Butti, who worked as a hotel manager and for telecommunications companies in his homeland.

Mr Butti said he was happy to volunteer to help others because he and his family have been given “a second chance” in Australia.

“I would like to thank the people of Australia and the government for giving us this opportunity to live in this beautiful country,” Mr Butti said.

“It means a lot for me and my family to consider Australia as a new home for us and we will work hard to become part of this beautiful community and pay our taxes to give the opportunity for others who are suffering in the world also to get the opportunity for a new life in Australia.” 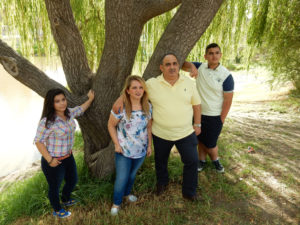