Leading contemporary artist and former Bosnian refugee Saidin Salkic has had his work recognised in a permanent exhibition to be installed at Australia’s consulate in Sarajevo.

Mr Salkic, also known as ‘Mido’, is a prolific and unique Australian contemporary artist and filmmaker. His art has featured in AMES Australia’s Heartlands Arts Project, as well as in exhibitions in Melbourne, Sydney, Adelaide, Brisbane, Sarajevo, Belgrade, Gratz and Cork.

Much of his work is inspired by the Srebrenica genocide

Mr Salkic was 12 years old when Bosnian Serb troops overran the United Nations declared “safe area” where he, his mother and sister, and thousands of other Bosnian Muslims had sought refuge in July 1995.

More than 8000 Bosnian Muslims were killed, his father one of them. Also, 23,000 women and children were forcibly deported amid widespread reports of rape and torture.

Commencing next month, his Sarajevo exhibition is titled ‘Human Angst and Joy’ and deals with human emotions amid the contemporary COVID-19 inspired state of human angst and pain. It was commissioned by Australia’s embassy in Vienna, which oversees the Sarajevo consulate.

Mr Salkic says that the times we live in are source of this pain but the exhibition also showcases the great human ability to feel sublime joy at the same time and within the same consciousness. 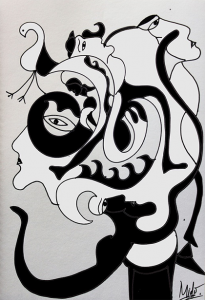 “This unique national recognition is a great honour for me, to get the chance to unite two of my favourite countries in this way; Bosnia and Australia. It is also great to know that I have risen from those muddy refugee tent floors on which I stood as a boy, to now be at the forefront of my new country, to symbolise its progressiveness and strength with my art on the international stage,” he said.

The exhibition ‘Human Angst and Joy’ reflects on Salkic’s personal experience and it is in many ways inspired by the Srebrenica genocide. It also reflects on a sense of collective human angst in the current times and the experiences humans are enduring.

In the works, the beach is representative of the space of the Australian consciousness, inhabited by the artist’s feelings, experiences and knowledge that he is bringing to his new country.

The feelings of fear, agony and joy are eternal feelings of the human kind. These works attempt to capture them and also to unite and bring closer together the broader human consciousness.

Salkic says that it is not only human love that brings us together, it is also the human fear and pain that make us human.

We can identify with those in others and that can make us more human. The aim of this exhibition is to make everyone more human and more connected and closer together and more understanding of each other as equal, unique beings that we are, Salkic says.